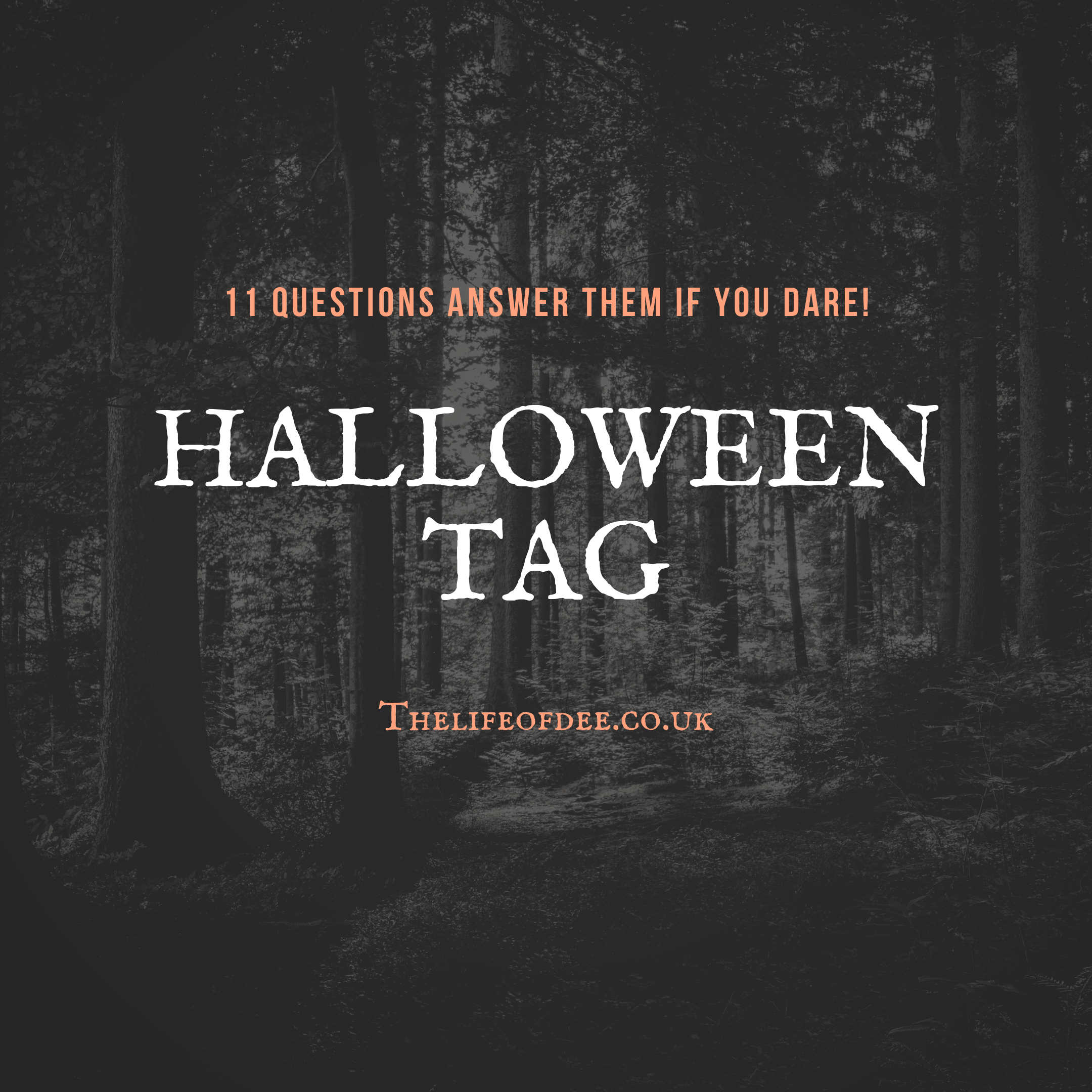 After Christmas, Halloween is my second favourite time of the year.  When else is it acceptable to wear a weird costume, knock on people’s doors and say “Trick or Treat”, eat your body weight in chocolate and sweets and watch scary films behind a cushion?  I’ve been excited for Halloween for a few weeks now and have been planning what we are doing since the Summer.  Yep! I am actually that sad!! I’m planning to carve a pumpkin, decorate the house and maybe even the garden and I’ve even considered hosting a toddler’s Halloween party.  So if like me you are Halloween mad or maybe you would like a little help to get into the Halloween spirit (pun intended), here’s a Halloween Tag post for you! 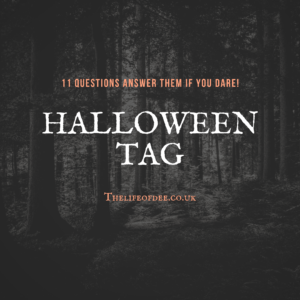 For me it’s The Nightmare Before Christmas.  I know some people think of that film as a Christmas one but they are wrong.  It’s definitely a Halloween film first and a Christmas one second!

2. And your favourite scary film to watch is?

I do love the first two Halloween films! The third one however is a bit weird with the Halloween masks.  I think because they were made in the late 70s/early 80s they come across as quite cheesy and that’s probably why I love them.

3. Do you have any Halloween traditions?

Previously I’ve decorated the house, watched some scary films and carved a pumpkin.  Oh and eaten a ton of sweets.  Nothing particularly exciting about that!  I’ve already got a few things planned for this year that I’d like to continue as Noah gets older so watch this space.

4. What is your favorite season of American Horror Story?

I have just started watching the current season ‘1984’ and what I’ve seen so far is ok.  The first season was really good as was season 3 ‘The Coven’ but the others haven’t been quite the same.  I gave up watching ‘Hotel’ and  ‘Apocalypse’ as I found them to be a load of shit if I’m being honest.

The decorations.  I really enjoy decorating the house with all my Halloween things.  I prefer the less scary kind of Halloween decor such as cute pumpkins, cats, etc rather than the creepy skulls and specimen types you can get.

6.  What Halloween costume will you or your children be wearing this year?

It’s been a few years since I last dressed up for Halloween, I was a Bad Fairy one year and another year I was a witch.  One time when I was a student I was a Vampire with fake blood around my mouth.  I had to go into college the next day with it still on my face as it wasn’t quite as washable as it said on the bottle.  Not quite sure what I will dress up as this year though.  I’ve got Noah a skeleton pirate outfit for Halloween so at least he’s sorted on that front.

7.  Has anything spooky ever happened to you?

A few weeks after my Gran died we were going through her jewellery.  We all got to choose a few things from her musical jewellery box.  My Auntie quite liked a necklace and asked if it would be ok if she took it.  The jewellery box made a pinging noise.  Then my Auntie picked up a gold chain with the initial P on it.  She said it was a lovely chain and with the initial taken off anyone could wear it.  The jewellery box made a few pinging noises.  We all laughed saying that it was Gran letting us know she wasn’t happy with that.  I asked if I could have the jewellery box as my Mum has brought it back from a holiday years ago.  On the way home my Mum mentioned the jewellery box noises and I laughed and said it was weird.  She agreed it was as it hadn’t worked in years!!

8.  Who is your favorite fictional serial killer?

Mike Myers from the Halloween films.  The mask that he wears and the fact he just appears and disappears out of nowhere just freaks me out.

9. What’s on your Halloween playlist?

Growing up in the 80s then the obvious choice is Michael Jackson’s Thriller and Ray Parker Jnr’s Ghostbusters.  This is Halloween from The Nightmare Before Christmas and Somebody’s Watching Me by Rockwell would feature on it took.

10. Do you hide behind a cushion at a scary bit on tv or are you so brave it doesn’t bother you?

Oh I’m definitely a hide-behind-a-cushion person! Anything creepy or gory comes on the screen and I’m not letting my eyes see it!

11. Would you spend a full night inside of a haunted house if someone paid you?

No.  Definitely not!  No amount of money would be enough to stay overnight in a haunted house.  I’ve seen the Haunting of Hill House and that didn’t end well for the people in it!

If you are looking for more Halloween posts:

Ten Little Things You Can Do To…

One response to “Halloween Tag”