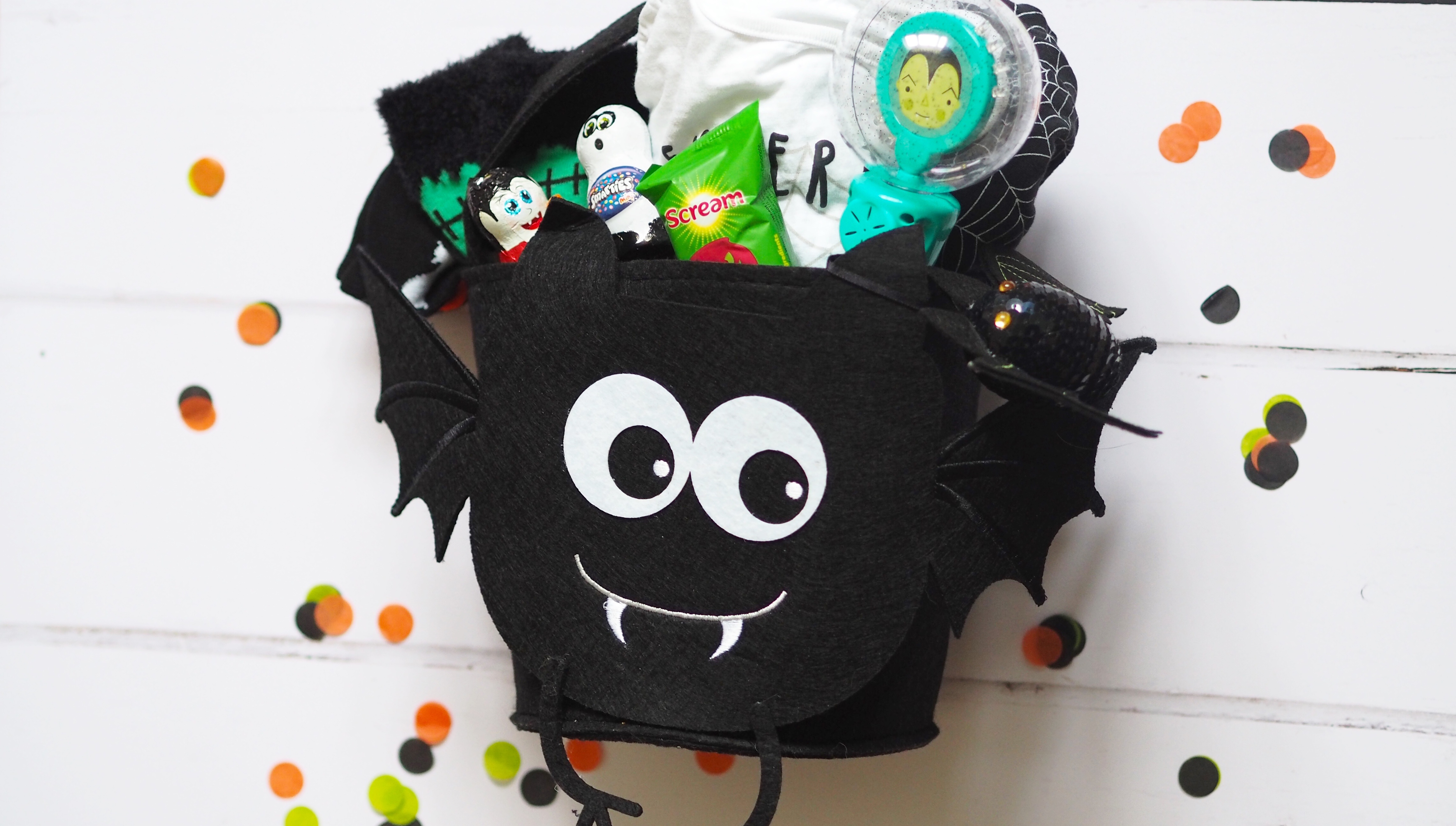 While browsing on Pinterest looking for things to do at Halloween with a toddler I came across quite a few posts about Halloween baskets. I’m guessing this must be quite a new thing as it’s something that I have never heard of before. I’ve known about Christmas Eve boxes for a few years now and have given them as gifts to friends and family but can’t say I’d ever heard of Halloween ones.  Not sure if I’ve been living on another planet but people also give their children Easter baskets.  Is this something new too?  Anyway I loved the idea of a Halloween basket, so much that I made one for Noah! He’s a bit young to go Trick or Treating so felt that this was a good way for him to celebrate Halloween.  If you want to know what’s in my toddler’s Halloween basket read on to find out! 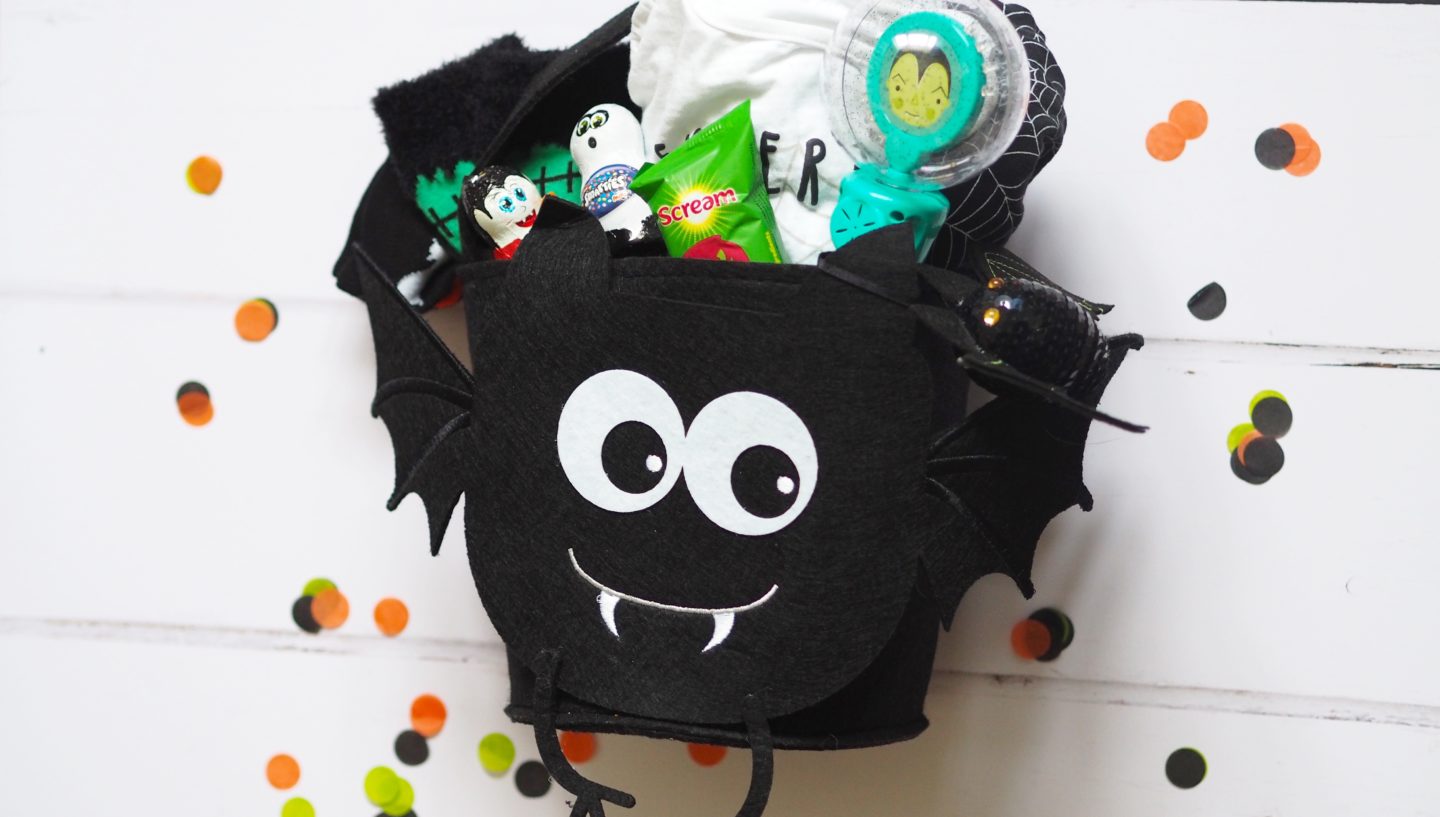 Disclosure: This post contains affiliate links (#aff), which means I may receive a commission if you click a link and purchase something that I have recommended. Clicking these links won’t cost you any extra money!


You really don’t need to spend a lot of money making up a Halloween basket.  Plus many of these items you can continue to use over the next few years too.  I will give this to Noah a couple of weeks before Halloween so he can get the use of the things in it.

I picked up this felt bat treat bag from Home Bargains for £1.99.  It’s quite large inside and had enough room to fit all his Halloween treats in.  I didn’t think about making a themed Halloween basket but in the end it turned out to be one.  I ended up buying quite a few bat items so it has ended up having a bat theme. 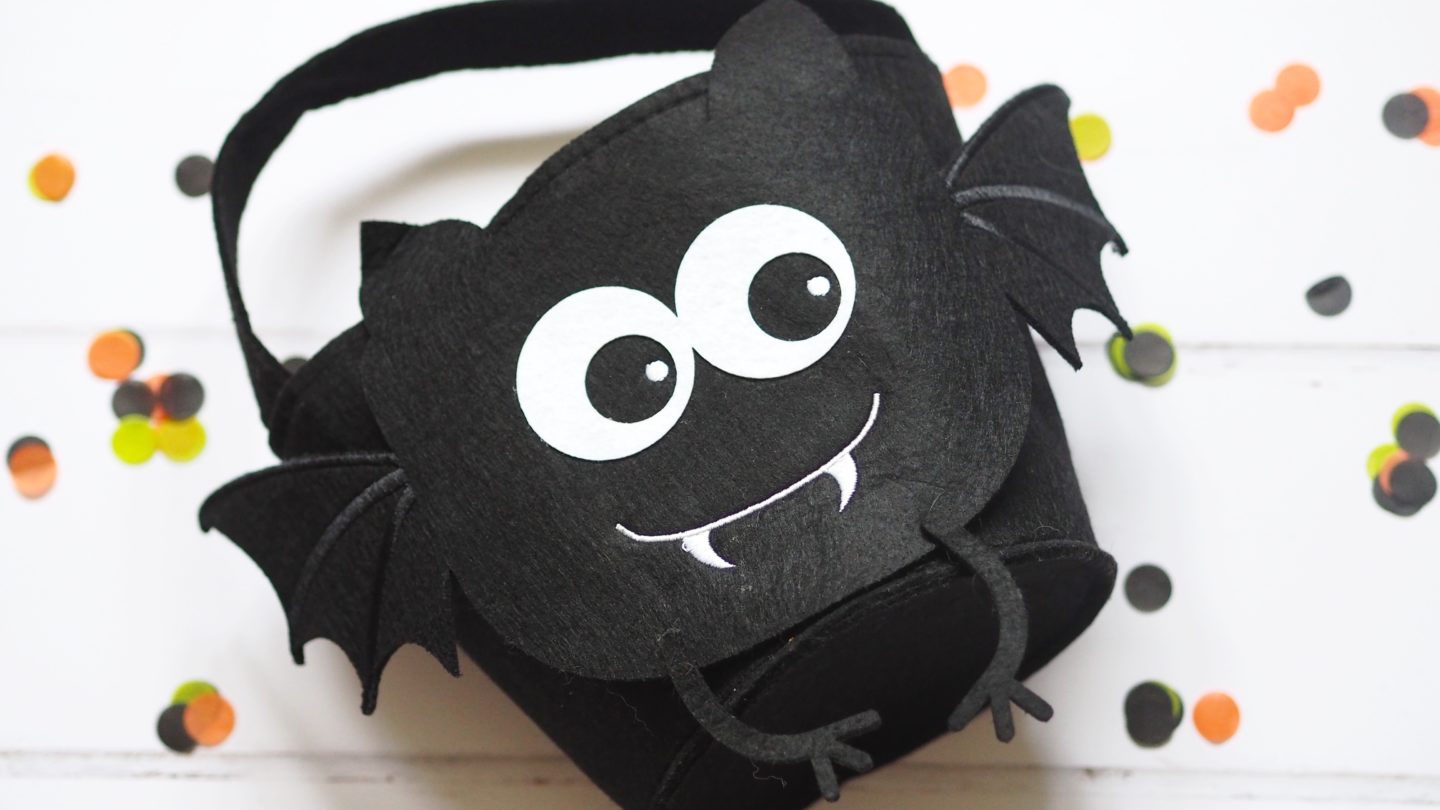 Noah loves books so I do like to get him new books every now and then.  I also like to get him seasonal books so he gets to understand the changing seasons and celebrations such as Halloween, Christmas and Easter.  I bought That’s Not My Bat to put in the basket.  As well as an orange coloured cover the edges of the pages are a purple metallic colour so very Halloweenie.  If you are looking for some Halloween books for toddlers suggestions then check out that post. 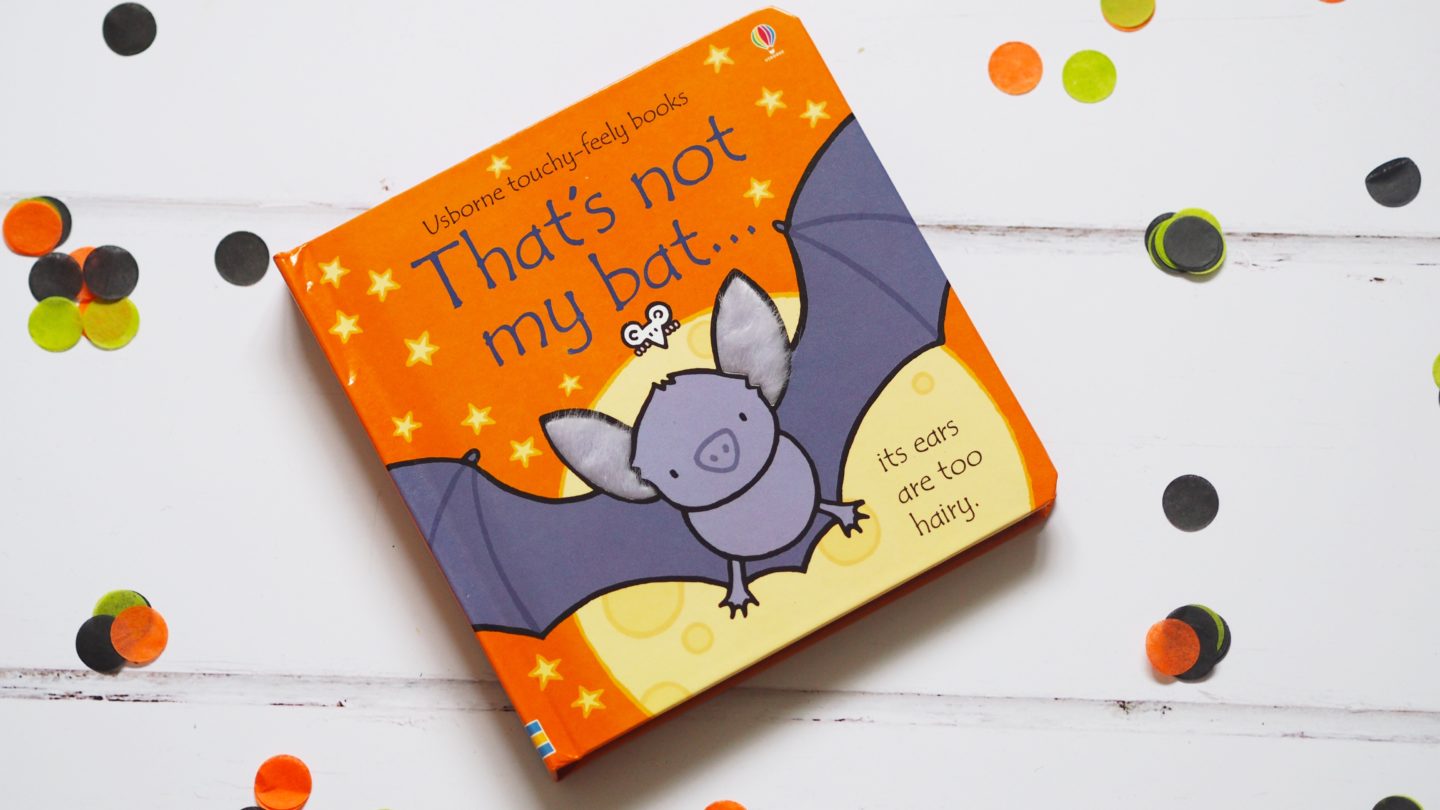 Although this spinning wand is for aged 3+,  my Mum bought it for Noah last year and he was fascinated with the lights when it was switched on.  Hopefully he likes it again this year.  Sainsbury’s have similar Spinning Wands this year for £5. 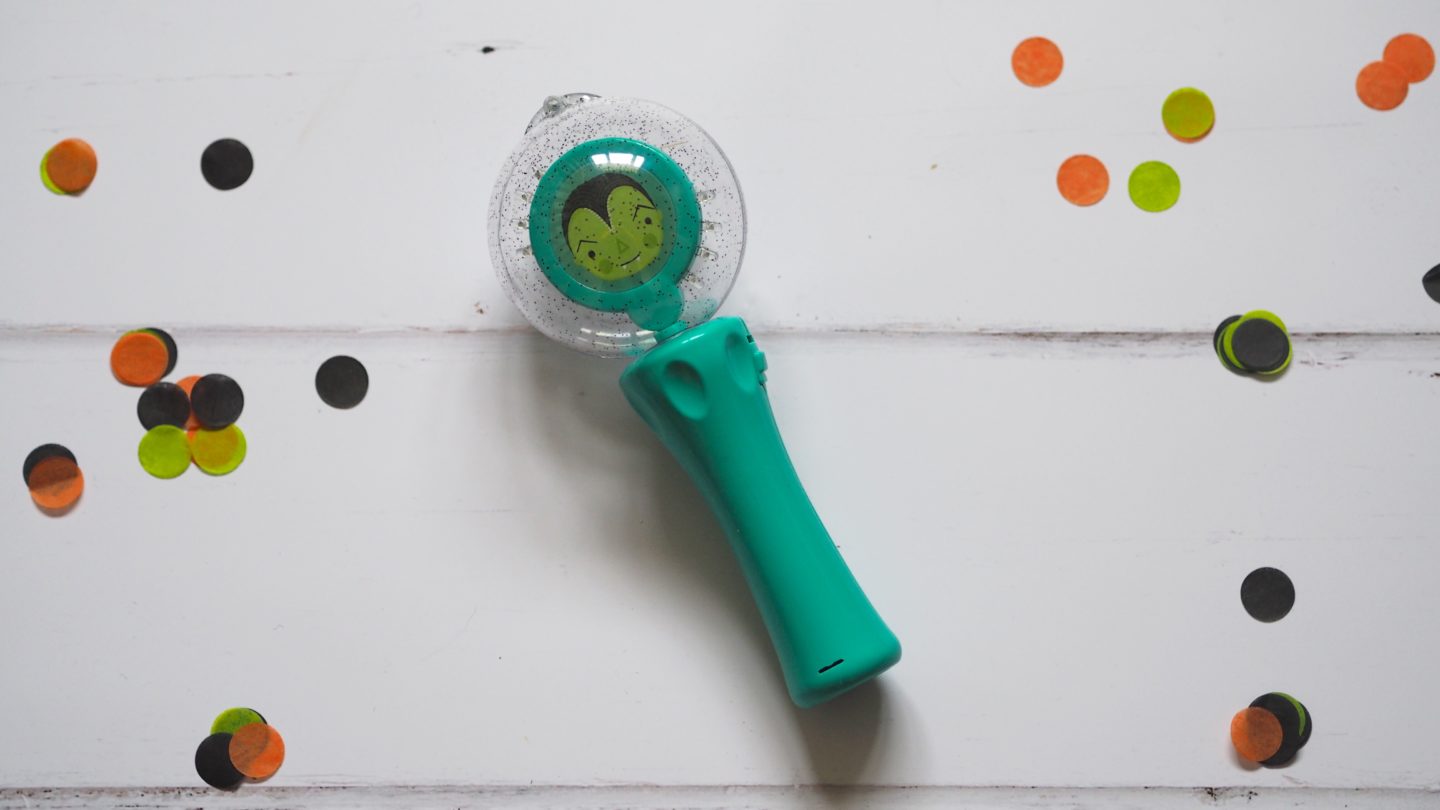 This 3 pack of socks (£3.50) are another Sainsbury’s buy.  In the pack are a Frankenstein, bat and orange striped pair.  As Noah has big feet (he was in a size 5.5 shoe before 18 months) then these socks should hopefully last him a while. 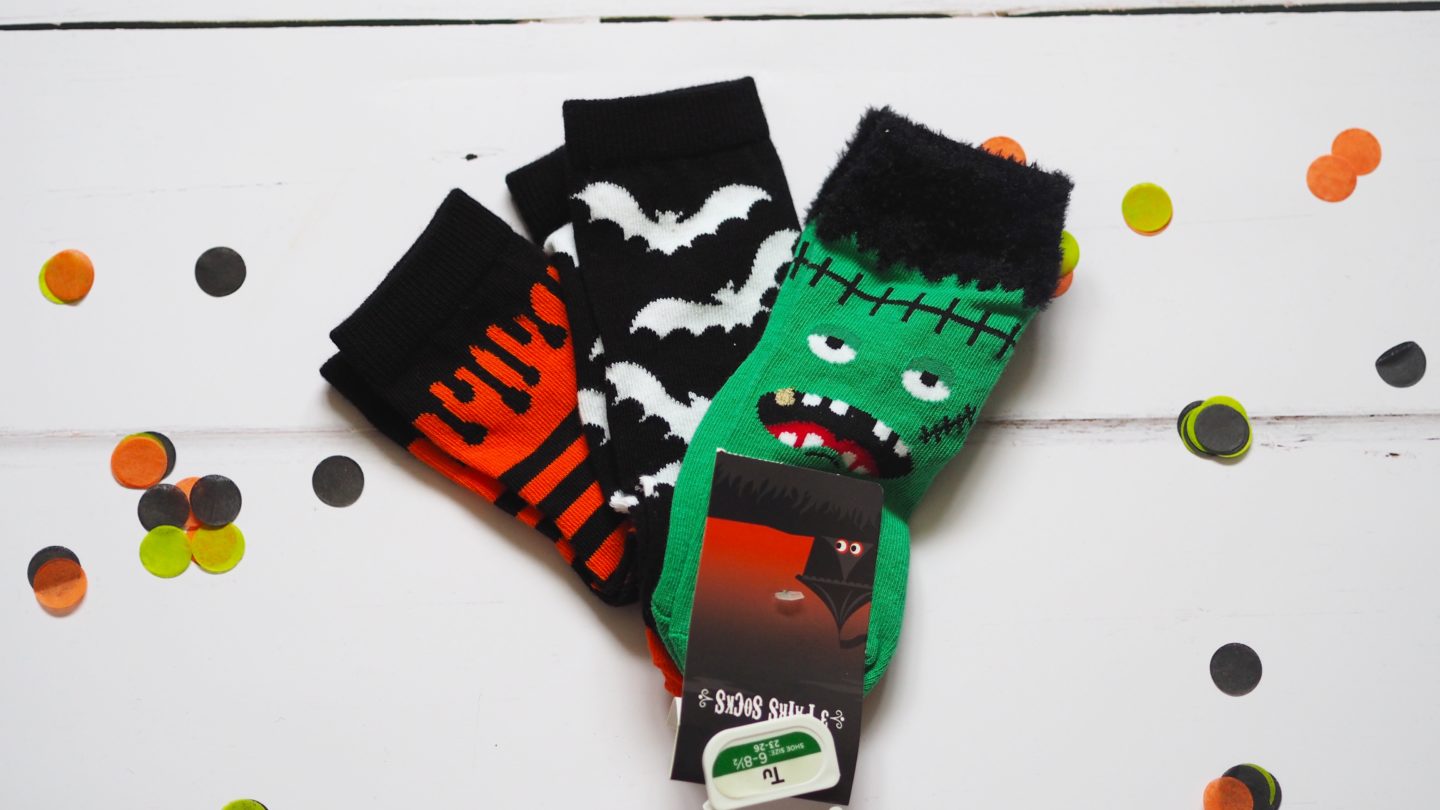 I thought I’d introduce Noah to the joy of stickers! I used to find peeling off stickers and creating a scene with them very therapeutic so maybe Noah will too.  If he doesn’t use them then maybe next year he will.  I picked this sticker book up from Sainsbury’s for £3.99. 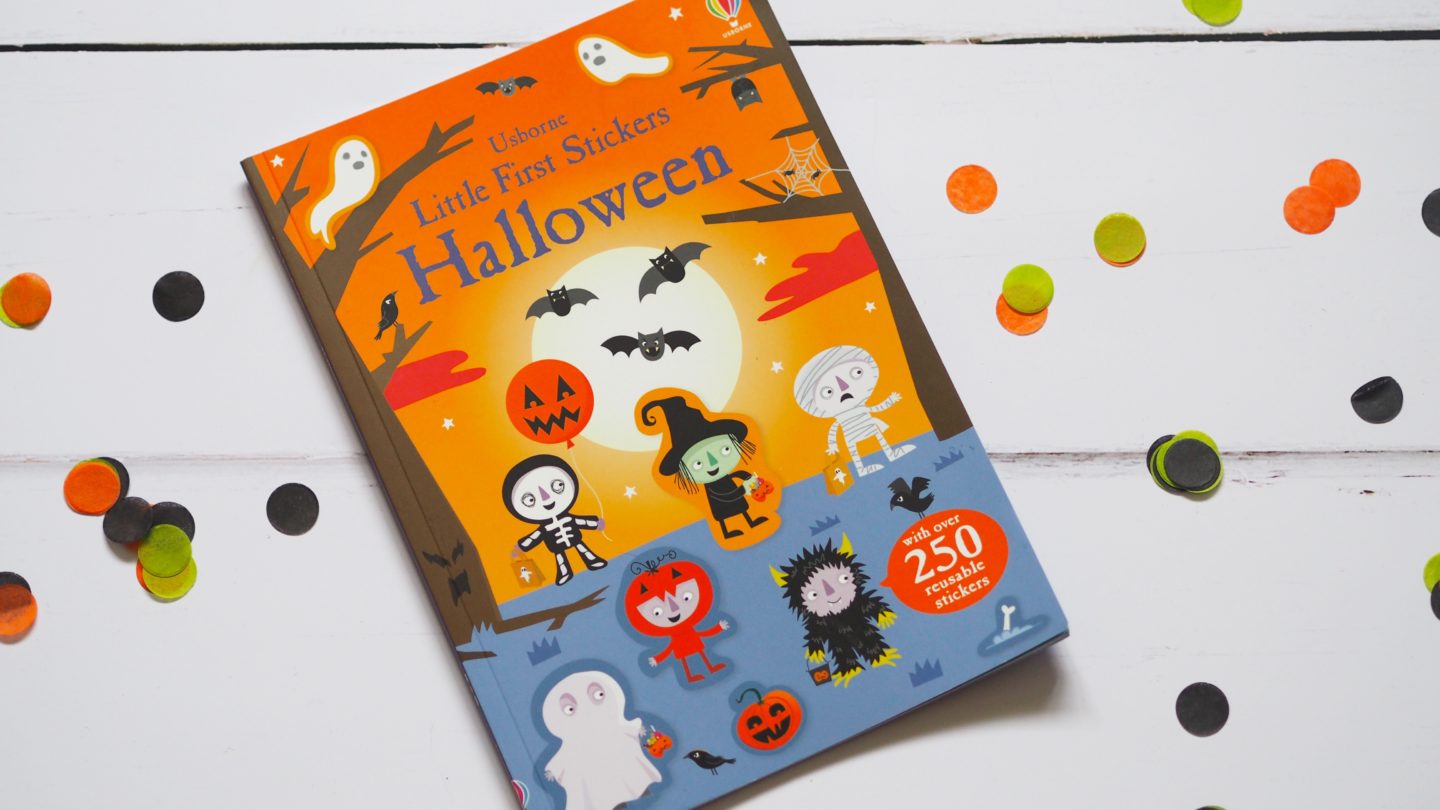 This twin pack projector torches were £1 from Poundland.  I think that he will love looking at the projected images on the wall . 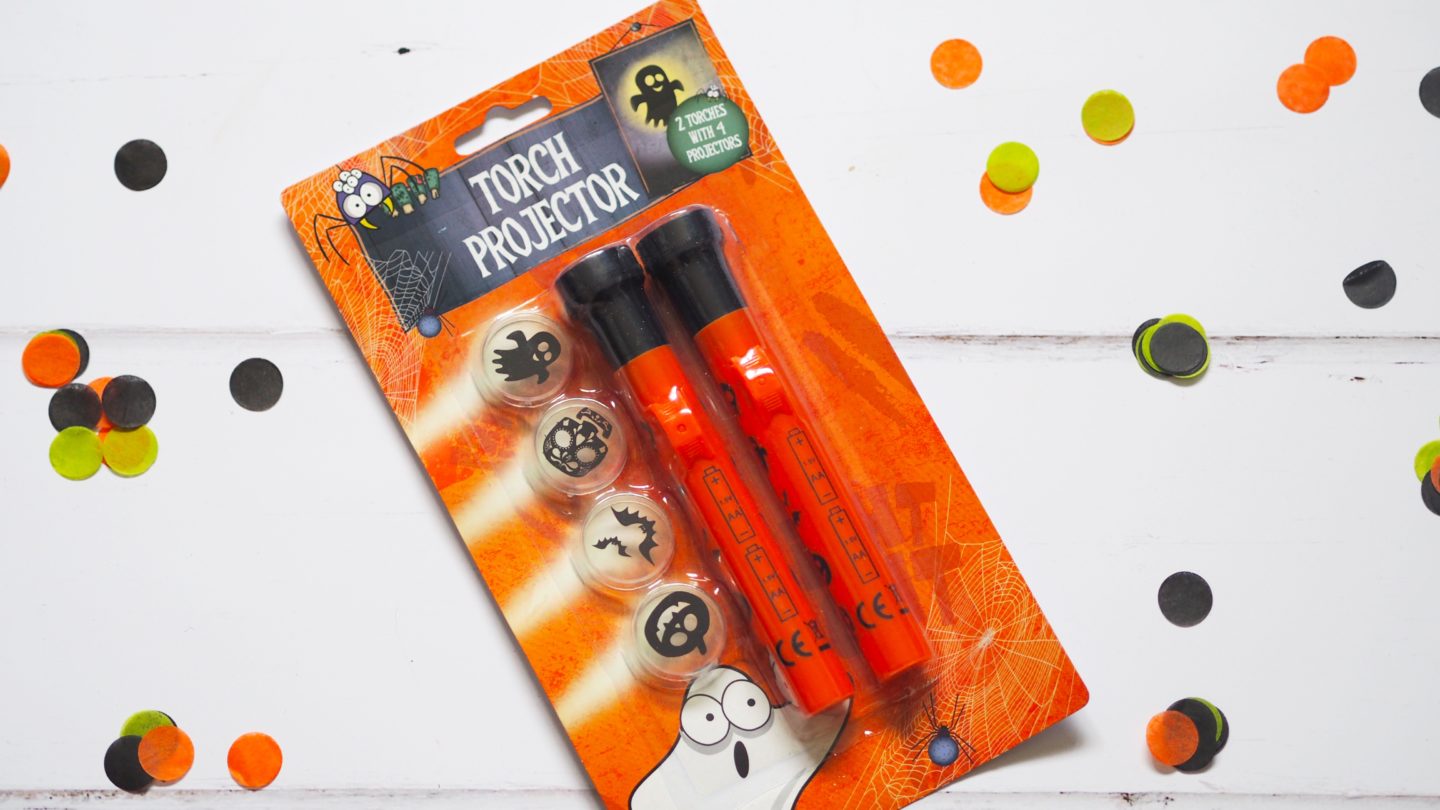 I thought that Noah could start having some Halloween decorations in his room and will probably buy him something new each year.  This sequin bat decoration (#aff) came from John Lewis and was £2.50.

I’m not quite sure if this is a Halloween outfit or pyjamas but I’ve decided to use them as pyjamas.  These were reduced in Sainsbury’s after last year’s Halloween and cost £4. 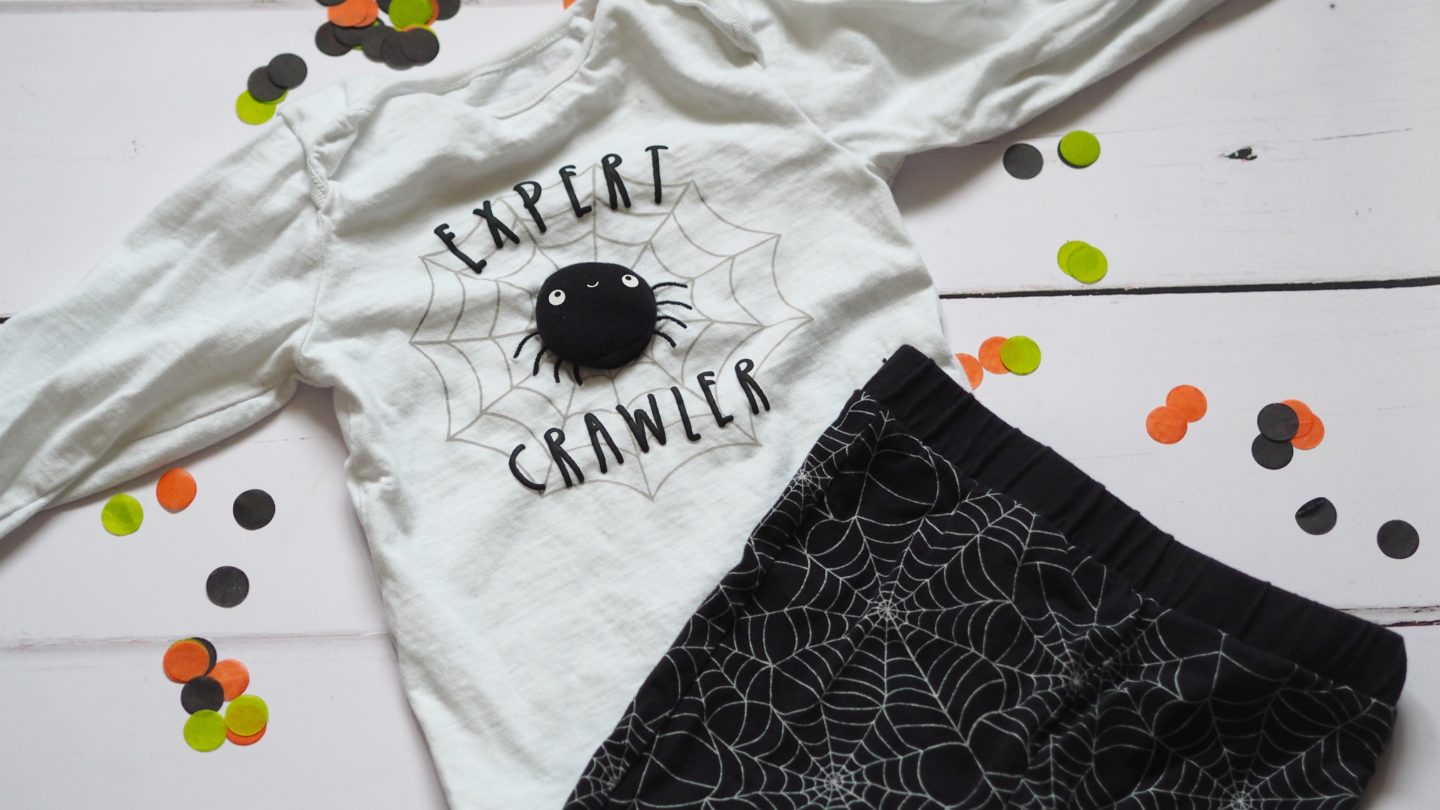 I used to love these curly strawed cups when I was younger.  I’m sure Noah will be fascinated by the liquid climbing up the straw as he drinks.  This cup was from Home Bargains and was £1.25.  It also came in purple. 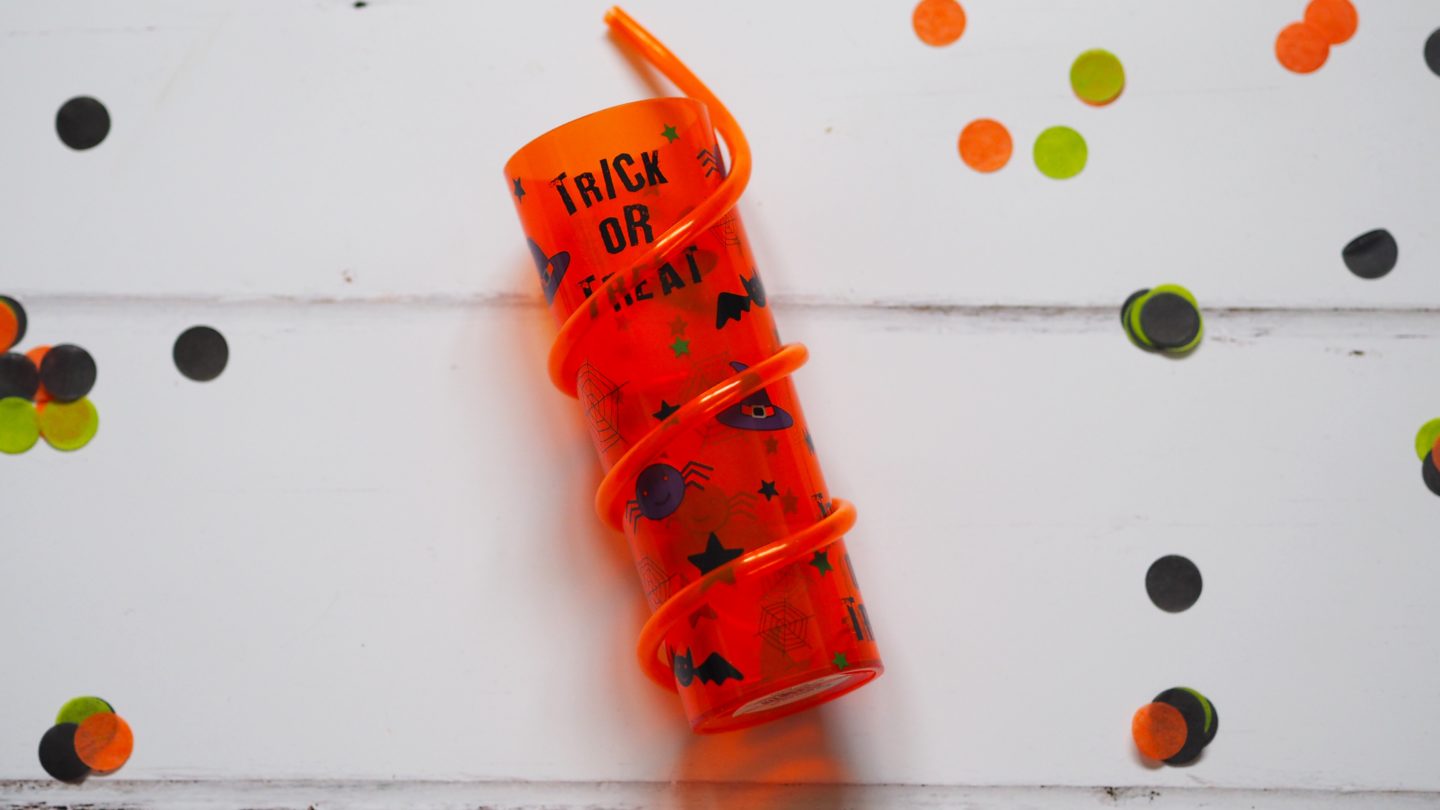 These spikey balls were also from Home Bargains and were 50p each.  When they bounce of the ground they flash as well as being squishy.  They are for children over 3 years of age but I will only let him use them when I’m there. 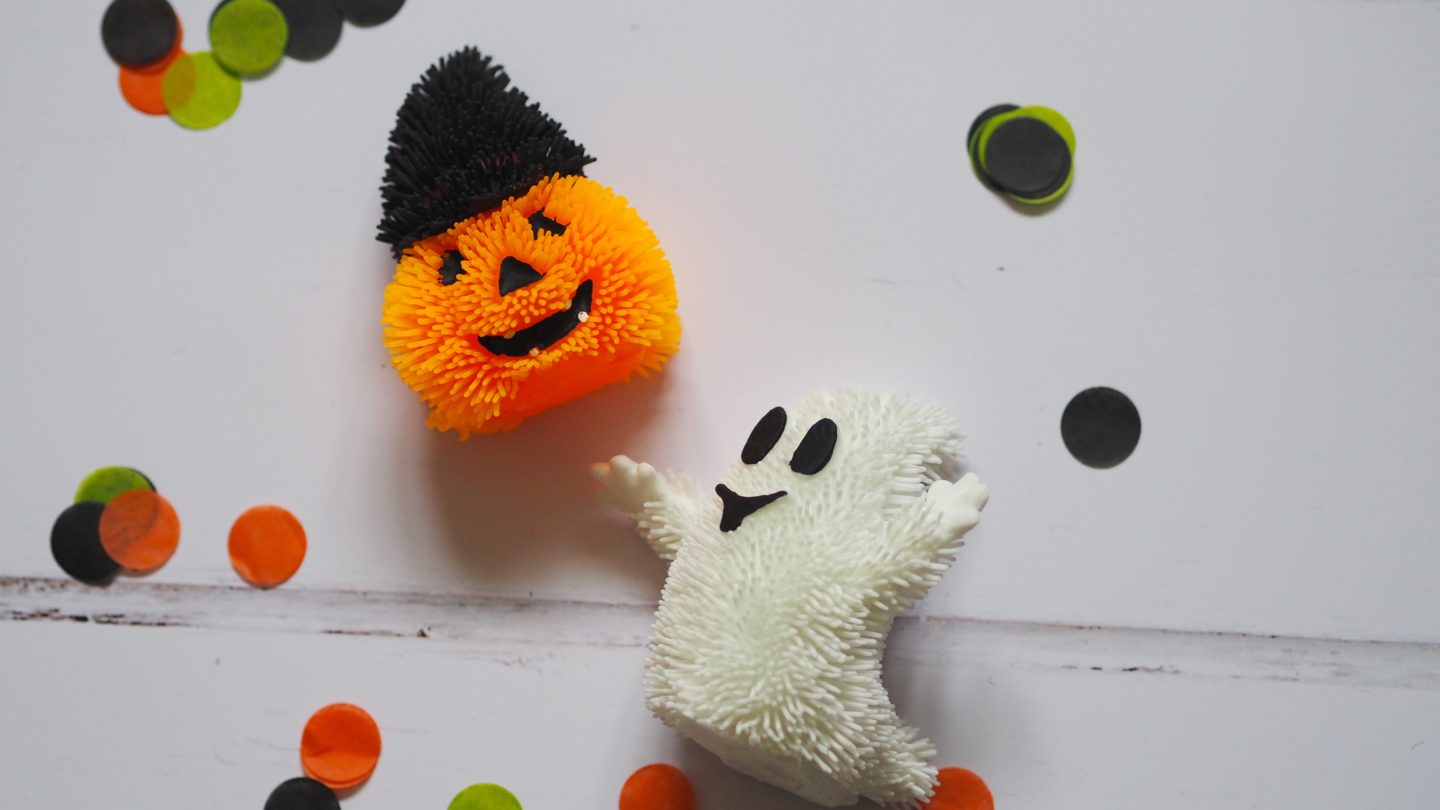 Treats are a Halloween Basket essential.  Obviously a toddler with a sugar rush is a very bad idea so I’ve just limited it to a couple of treats for him with a Milky Bar Vampire and a Ghost filled with Smarties.  He also loves the Soreen Cake Bars so I stuck in a couple of Toffee Apple flavoured ones which he is yet to try. 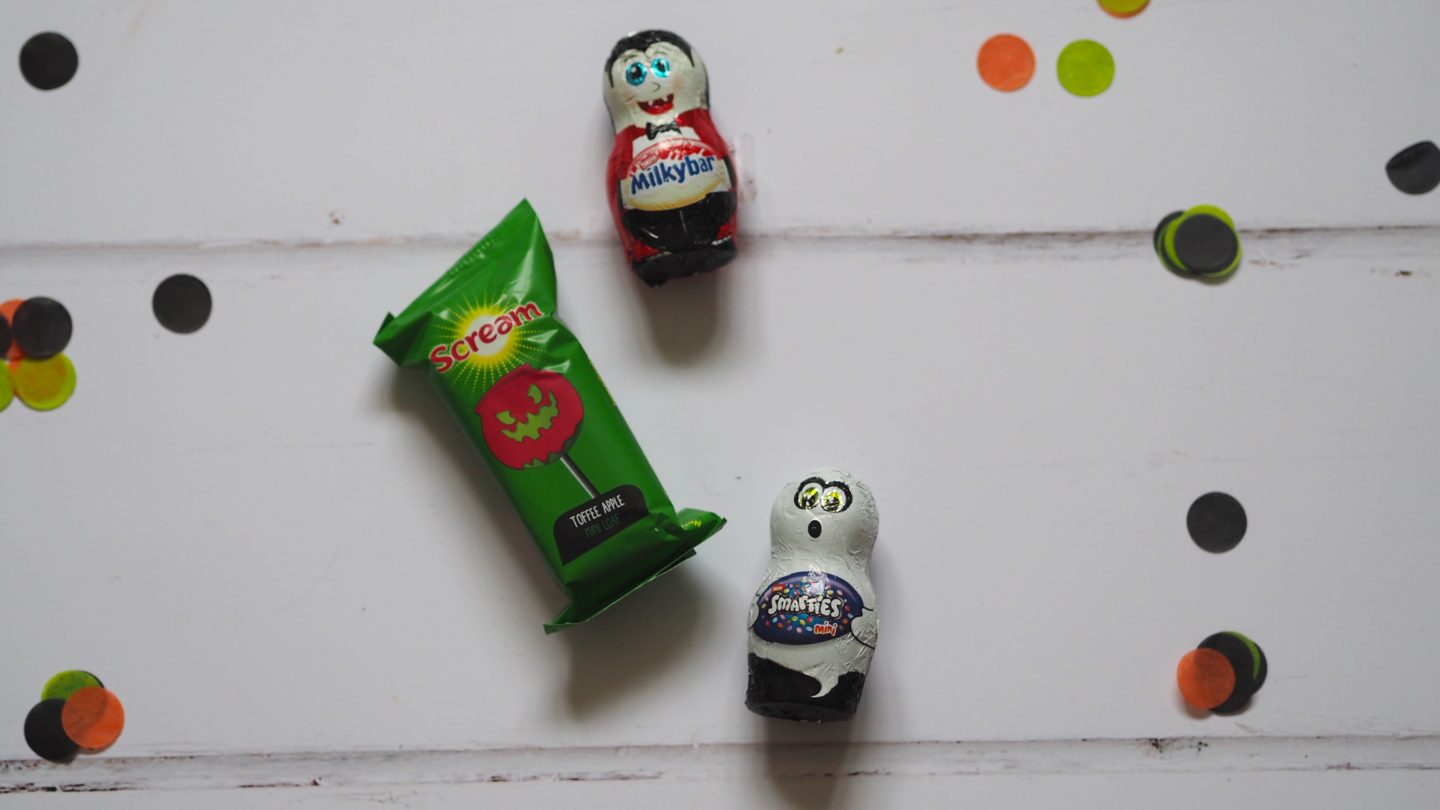 If you fancy giving a Halloween basket a try other things you could include in them:

I hope that my Toddler’s Halloween Basket post gave you some ideas if you want to do something similar. 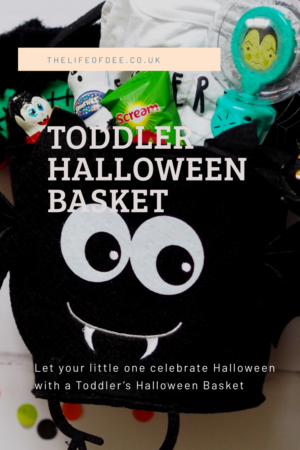 If you are looking for other toddler posts:

How To Celebrate Halloween With A Toddler