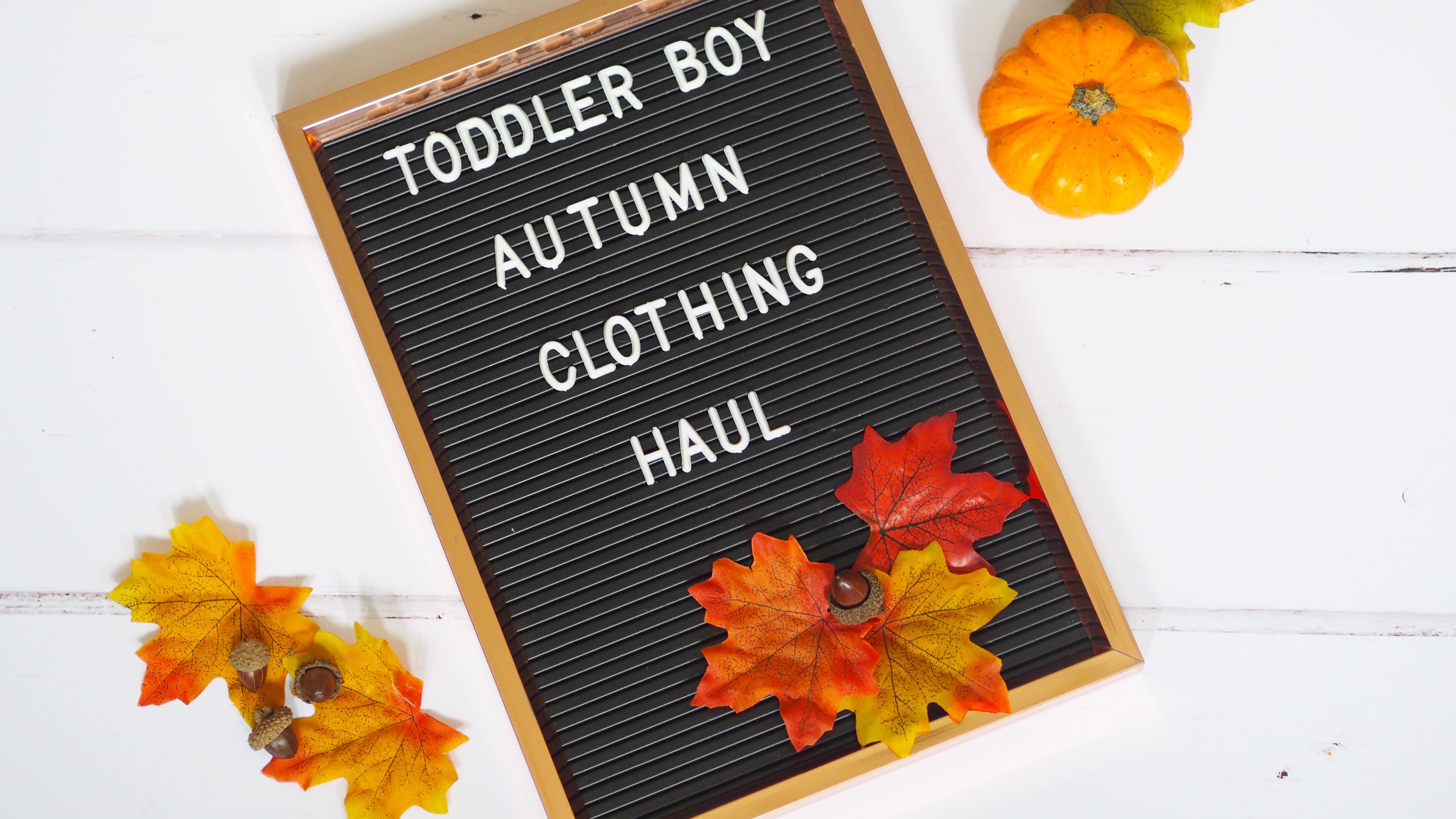 Whether you are looking for ideas on what to buy this season or just want to have a nosy, read on to see my Toddler Boy Autumn Clothing Haul. 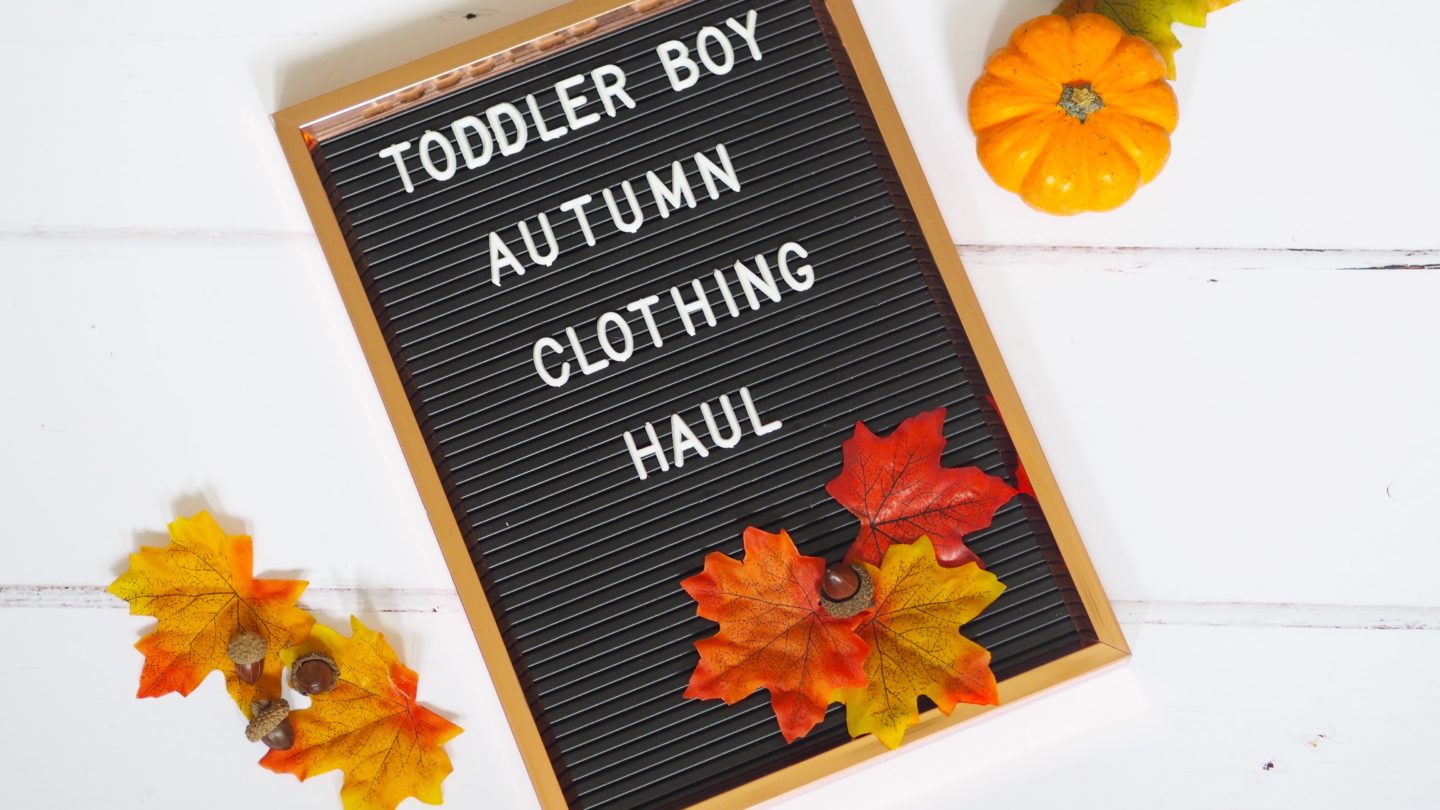 Autumn will soon be here and that means swapping out Noah’s t-shirts and shorts for cosy jumpers and woolly hats.  Children outgrow their clothes and shoes at a rate of knots, sometimes before they have even worn them more than a handful of times.  This means it is so easy to get carried away and spend a small fortune on buying a new wardrobe for them every season.   With this in mind I try to save money where I can by buying in sales, eBay or when there’s offers on.

I tend to buy most things a year ahead.  For example, at the end of Summer I buy the next size up in the sales so they can be worn the following year.  Then I just need to top up with a few things that season.  It’s worthwhile keeping a note of what you have already bought as you can easily forget what you have.  I bought pyjamas in size 18-24 months last year in the sales as well as others I’ve picked up throughout the year.  Noah now has 14 pairs of pyjamas!!  Lesson learned!  With Noah just starting to outgrow his 12-18 months clothes now these should see him through until the end of Winter. 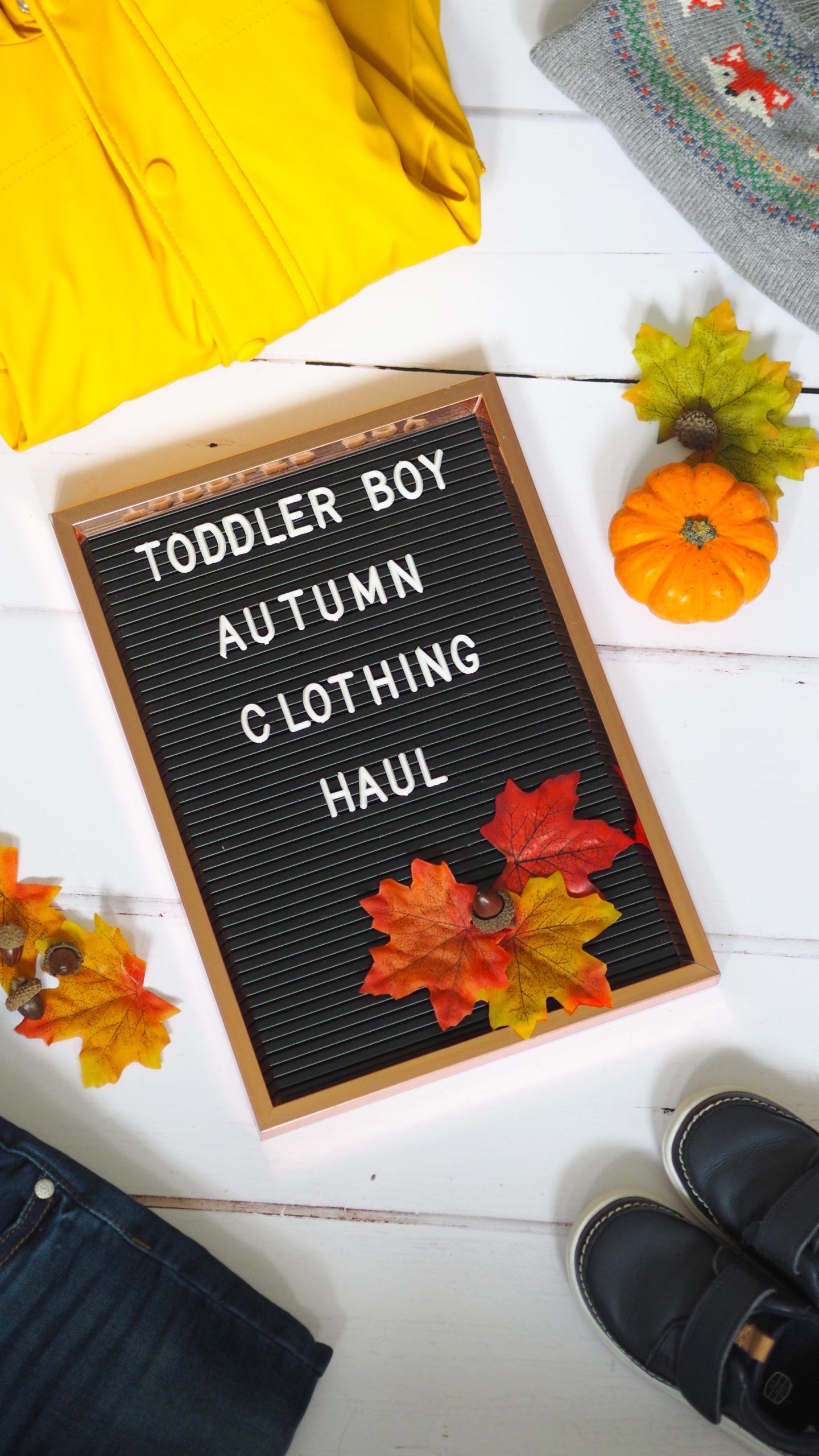 For his jackets I decided to get two, this was so he had one to wear and one to wash. I can only imagine how dirty he’s going to get picking up leaves, splashing in puddles, etc.  I went for thick cosy anoraks that will last him through the colder Autumn days and Winter too.  My Mum bought him one and I picked up the second one from eBay.  It is by Blue Zoo and is in excellent condition.  Plus including postage it was only £5.50. 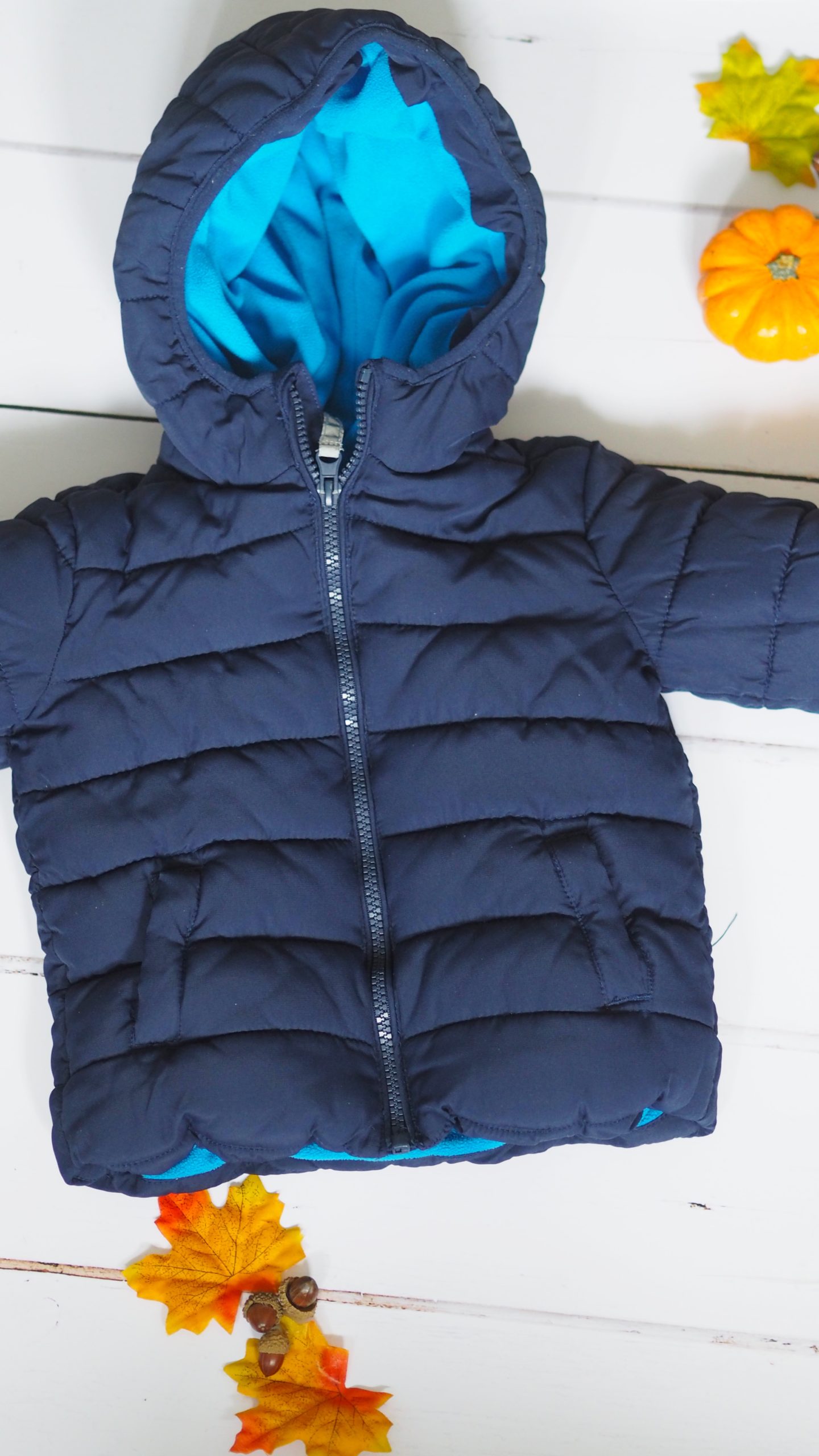 I thought that this yellow raincoat from Mothercare would be so cute worn with a pair of jeans.  It’s perfect for those slightly warmer Autumn days when a thick cosy jacket would make them too hot.  I bought it in their sale earlier in the year for £10 instead of £20 so a good bargain.  Plus it might last him through Spring as well (depending on how fast he grows!).  Although Mothercare no longer sell the same design they do have a similar yellow raincoat for £22. 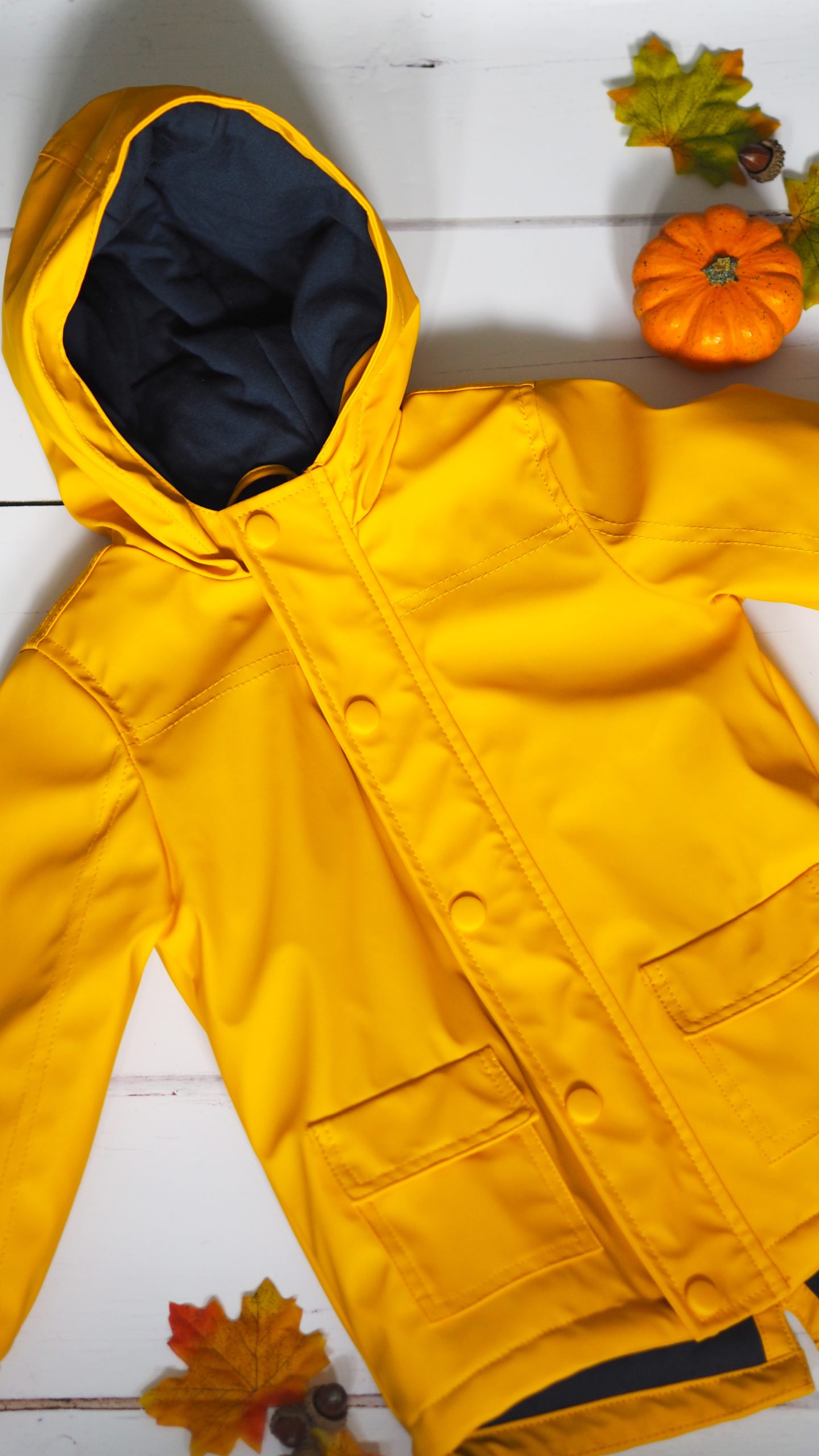 Once the rainy days are here Noah is going to have great fun discovering splashing around in puddles.  To prevent wet feet I picked up a pair of navy wellies from Mothercare.  I’ve also recently bought him a pair of good walking shoes from Clark’s, these ones are Cloud Ember and were £33!!  His first pair only lasted him 8 weeks so I’m hoping that these ones can be worn a bit longer. 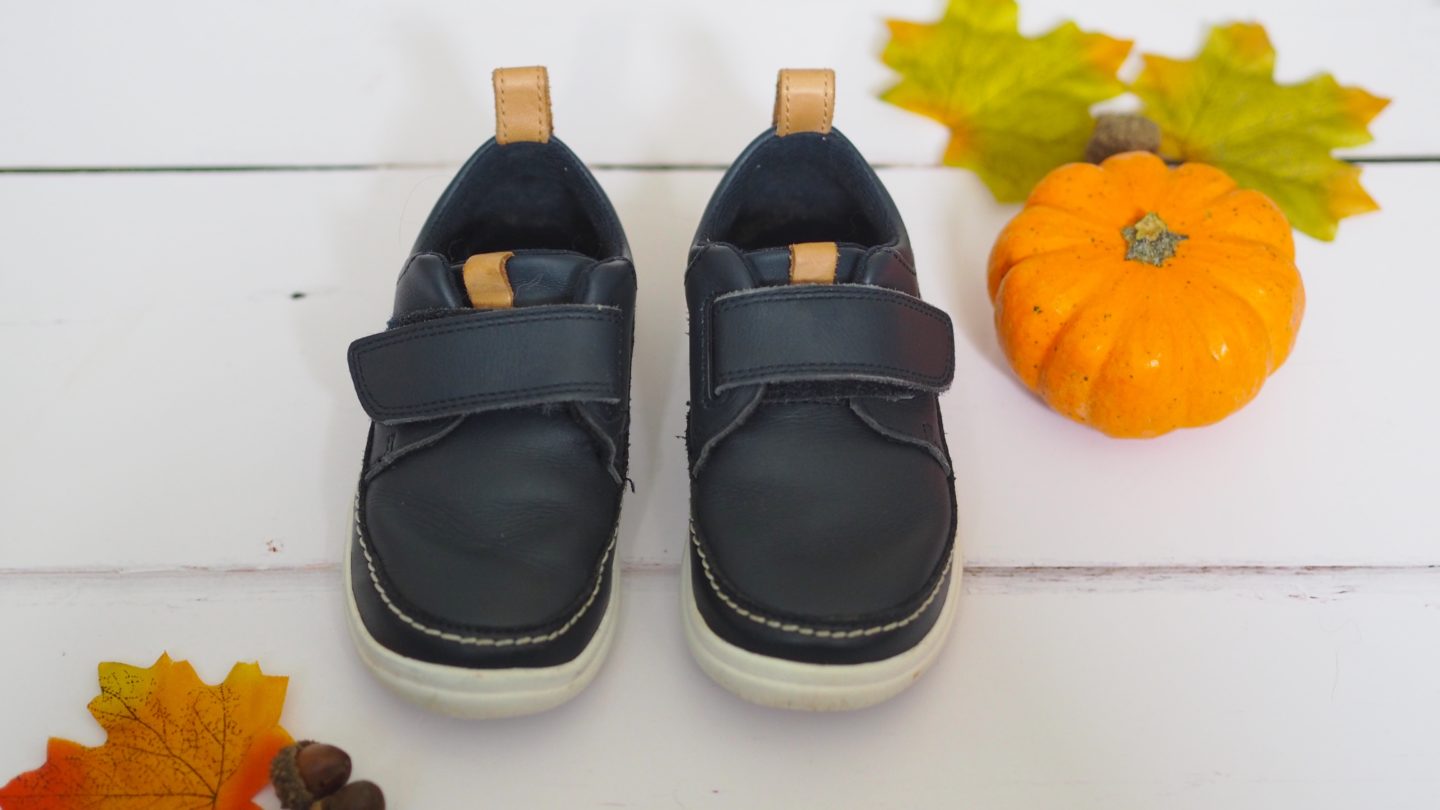 Waterproofs are a really good idea if you are heading to the park, out in the garden or walking the woods.  Basically if you are anywhere that is wet and muddy then get these!  You can get all-in-one puddlesuits or separate dungarees and jacket.  However I think you will get more use out of the separates as you can wear the jacket on it’s own.  Also I’ve heard that if you are toilet training then it’s more of a faff removing the all-in-ones than the separates.  My Mum picked up this waterproof set from Lidl’s so not sure how much they were. 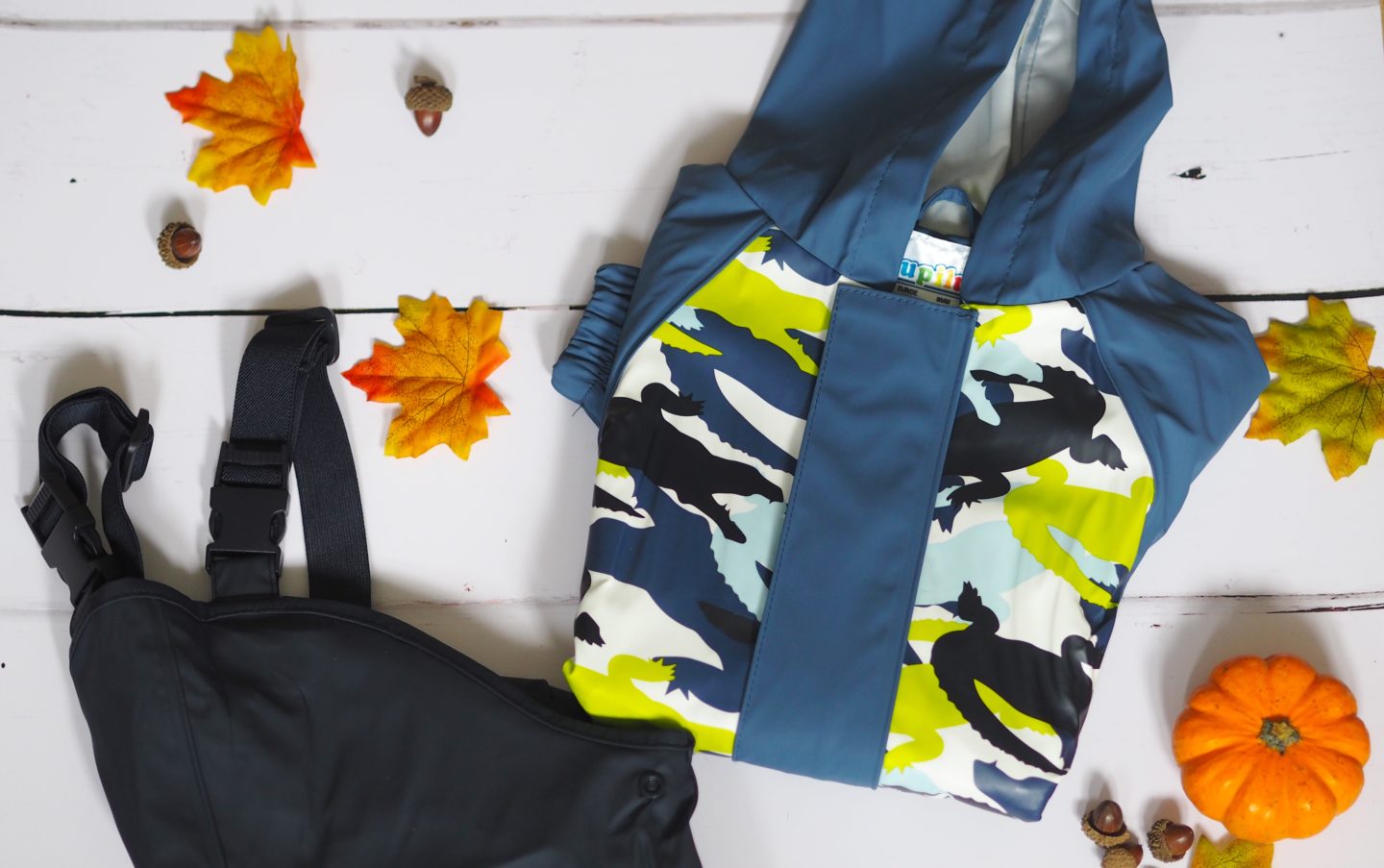 With the colder weather coming a hat and gloves are a necessity.  However good luck on getting them to keep them on!  For some reason Noah doesn’t mind the woolly hats, it was the Summer ones that he was constantly removing.  This cute woolly hat and gloves set was bought in Mothercare’s sale last year so is no longer available.  Noah did have the hat in a smaller size last year and I liked it so much I bought it in the next size up.  My Mum very kindly stitched some cord onto the gloves so that he won’t lose them.  If don’t you want to lose 5296 gloves this Autumn/Winter and you can’t sew, JoJo Maman Bebe has a mitten string that you can clip onto the gloves. 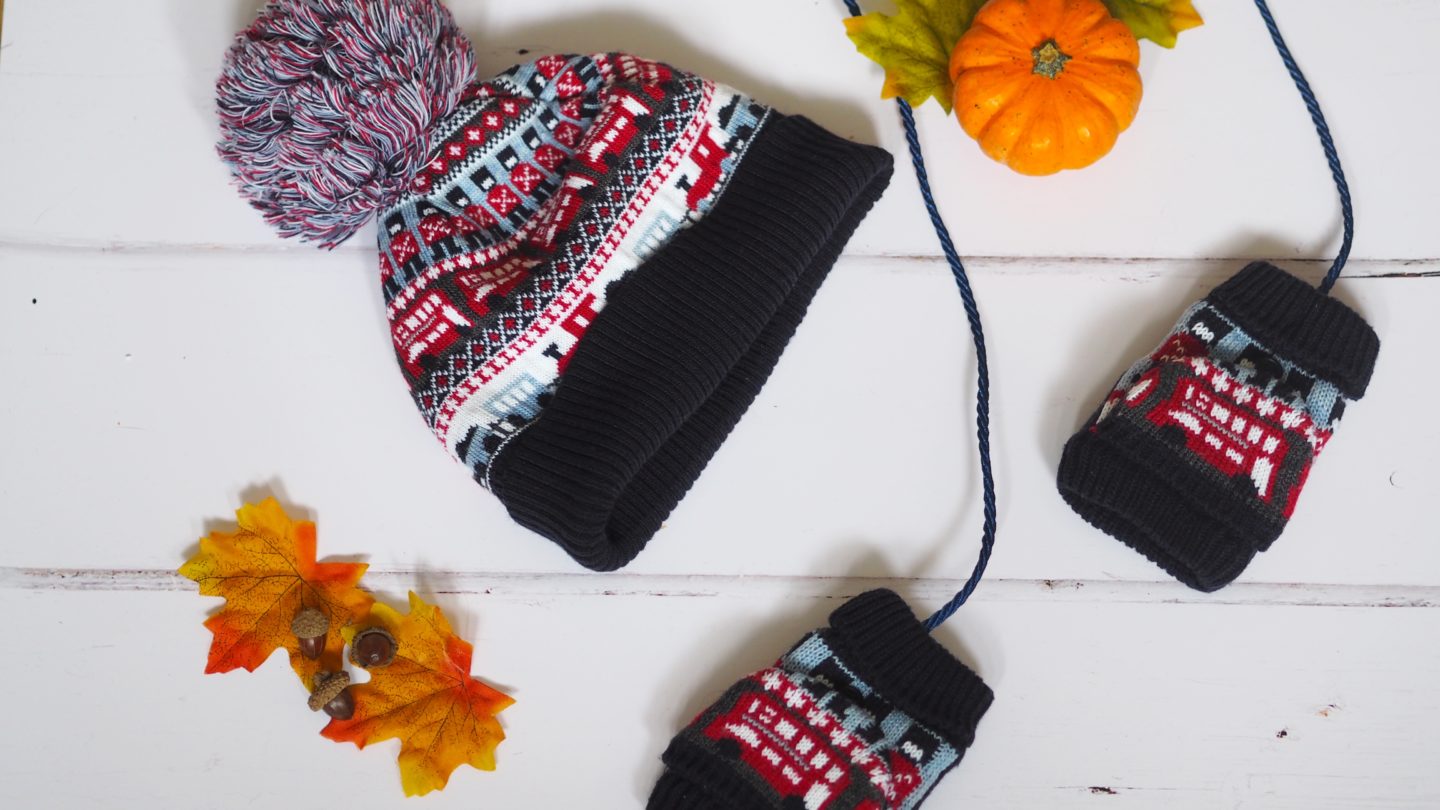 Having a toddler of the climbing variety I need to have hard wearing clothes.  Jeans are a good choice for this.  I’ve bought him two pairs but might buy another pair later.  He’s got the mid-wash skinny jeans (£11.50) and the mid-wash denim jeans (£9.50) from Mothercare.  I bought them both in the sales earlier in the year where they were only £5 and £3.50 respectively. 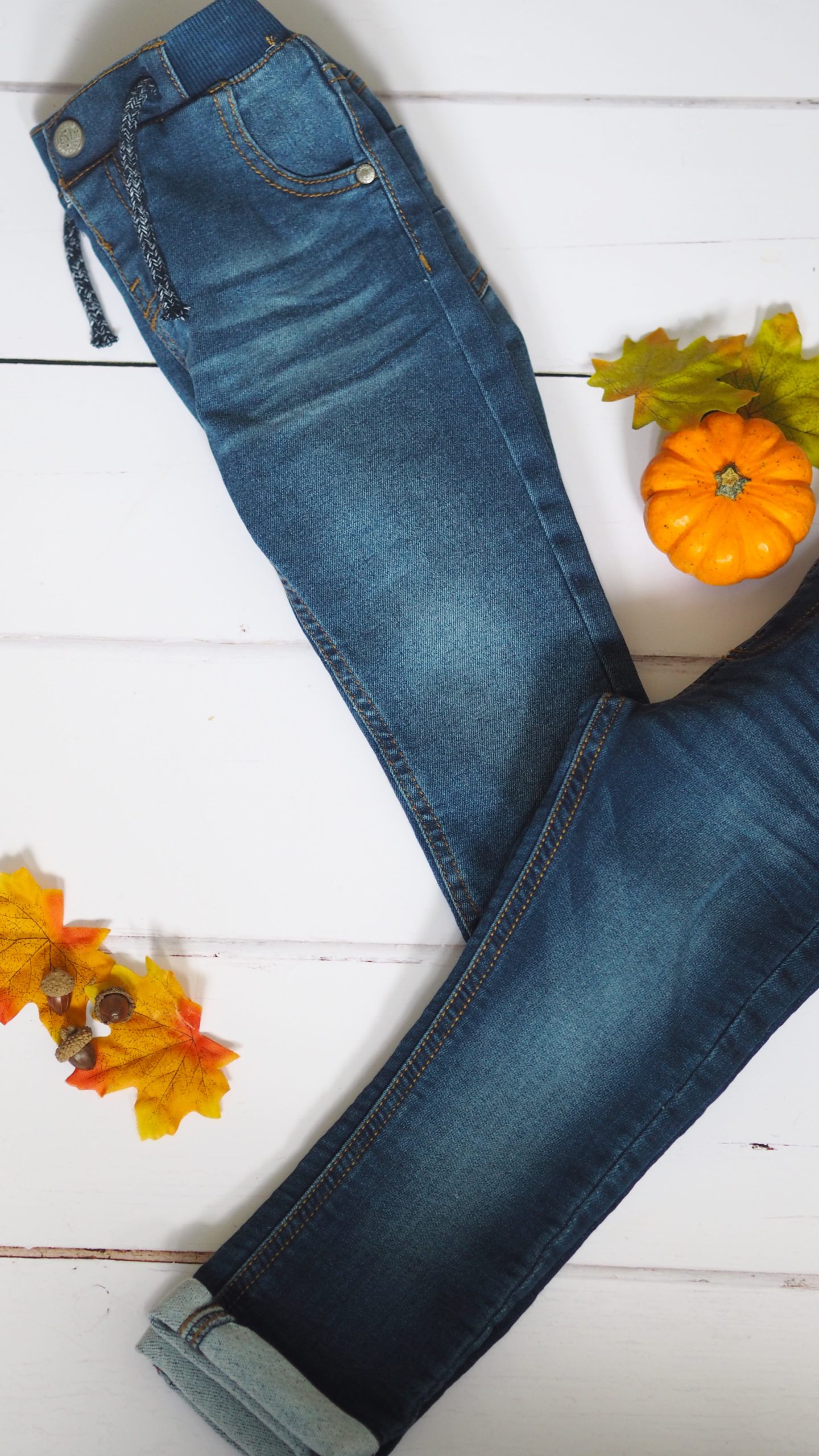 How cute are these cords from Boden with a fox peeking out of the pocket?  I bought these last year but they weren’t in the sale and were  £24.  But they didn’t cost me that!  Every so often Boden sends a £10 off a £30 spend (I think I’ve had around 5 now in the last 12 months) I also look online for discount codes for 20% off and free delivery.  That means I make a huge saving and it works out that one of my ordered items are free.  It also goes with the fox hoodie below. 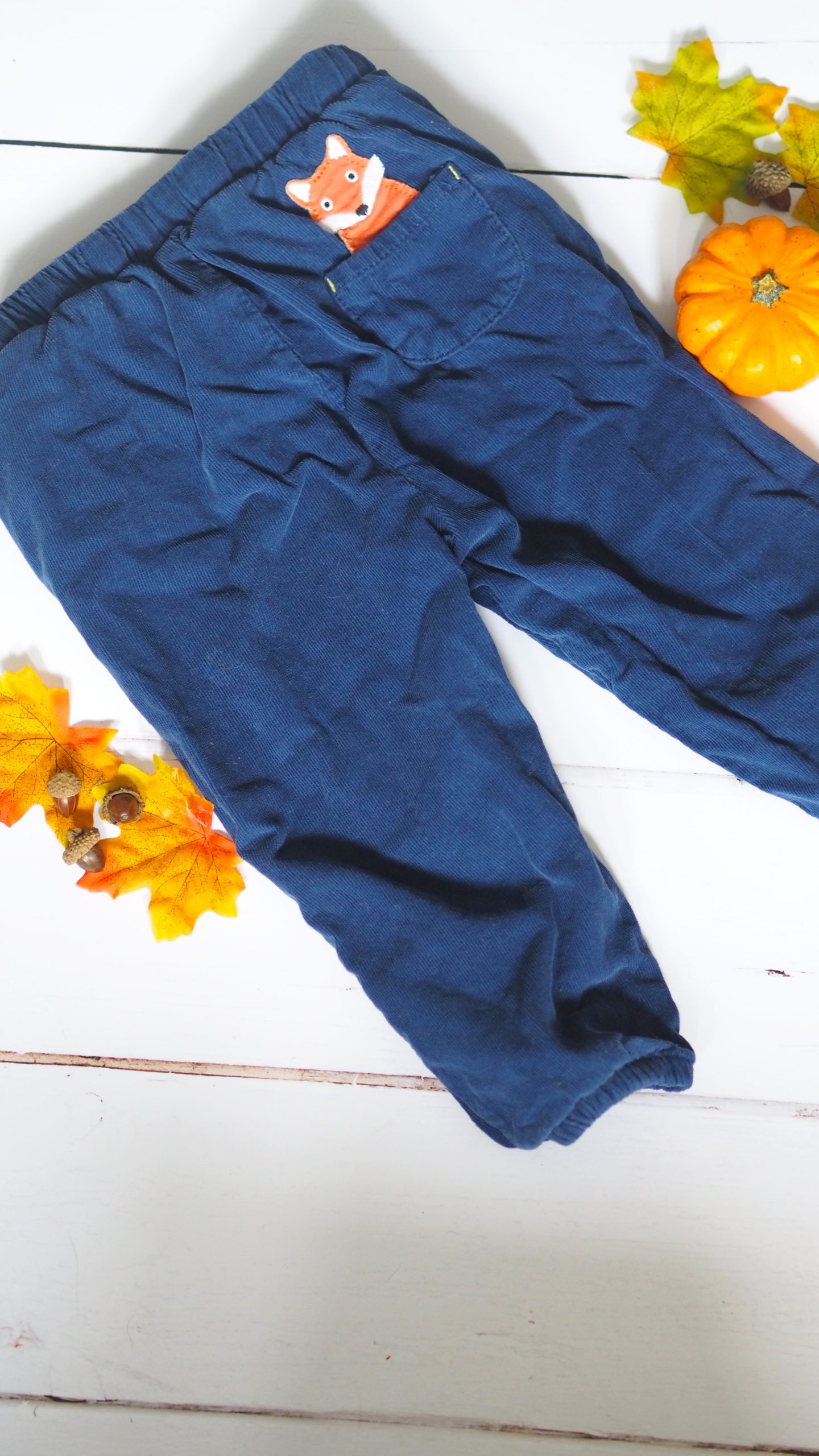 Noah has quite a few hoodies.  I seem to have an addiction to buying them!  My favourites one though is this fox hoodie from Boden.  Again this was purchased last year and was £33 but with the discount codes and £10 off it cost £16.40, so half price.  Hoodies are good for layering up with long sleeved t-shirts on a warmer Autumn day or for wearing indoors on a colder day. 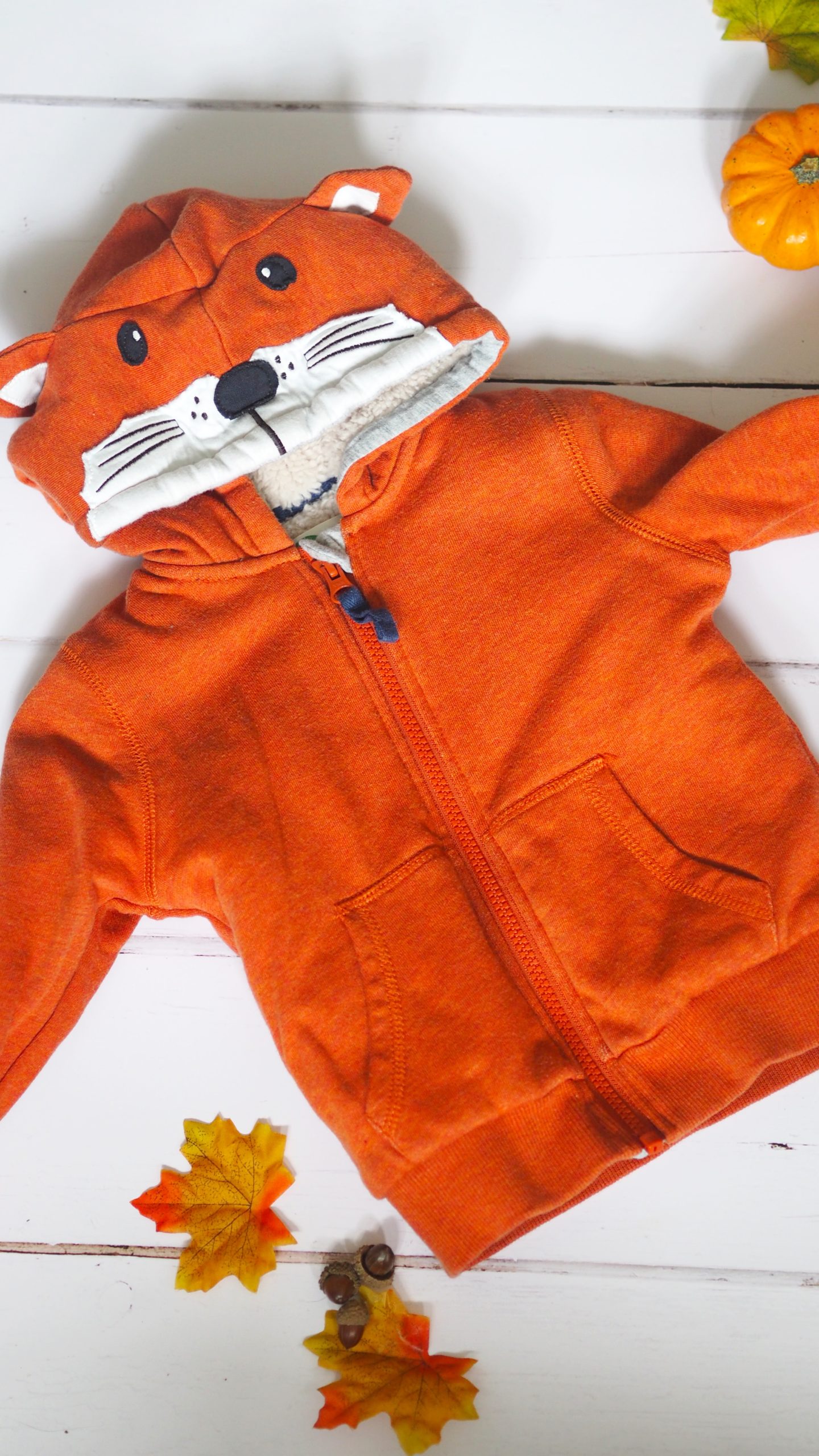 I picked up quite a few long sleeved t-shirts, some sweatshirts and a couple of jumpers in the sales.  I felt that he could probably do with a couple more jumpers.  Continuing with the fox theme I saw this cute fox fair isle jumper (£23) from JoJo Maman Bebe.  They had an offer where you were getting 3 for 2 on selected items.  I wouldn’t normally spend that much on a jumper but I thought it was really sweet !!  I bought it in a size 18-24 months and liked it so much that I ordered a 2-3 year too.  The joggers below were the third item that I got free. 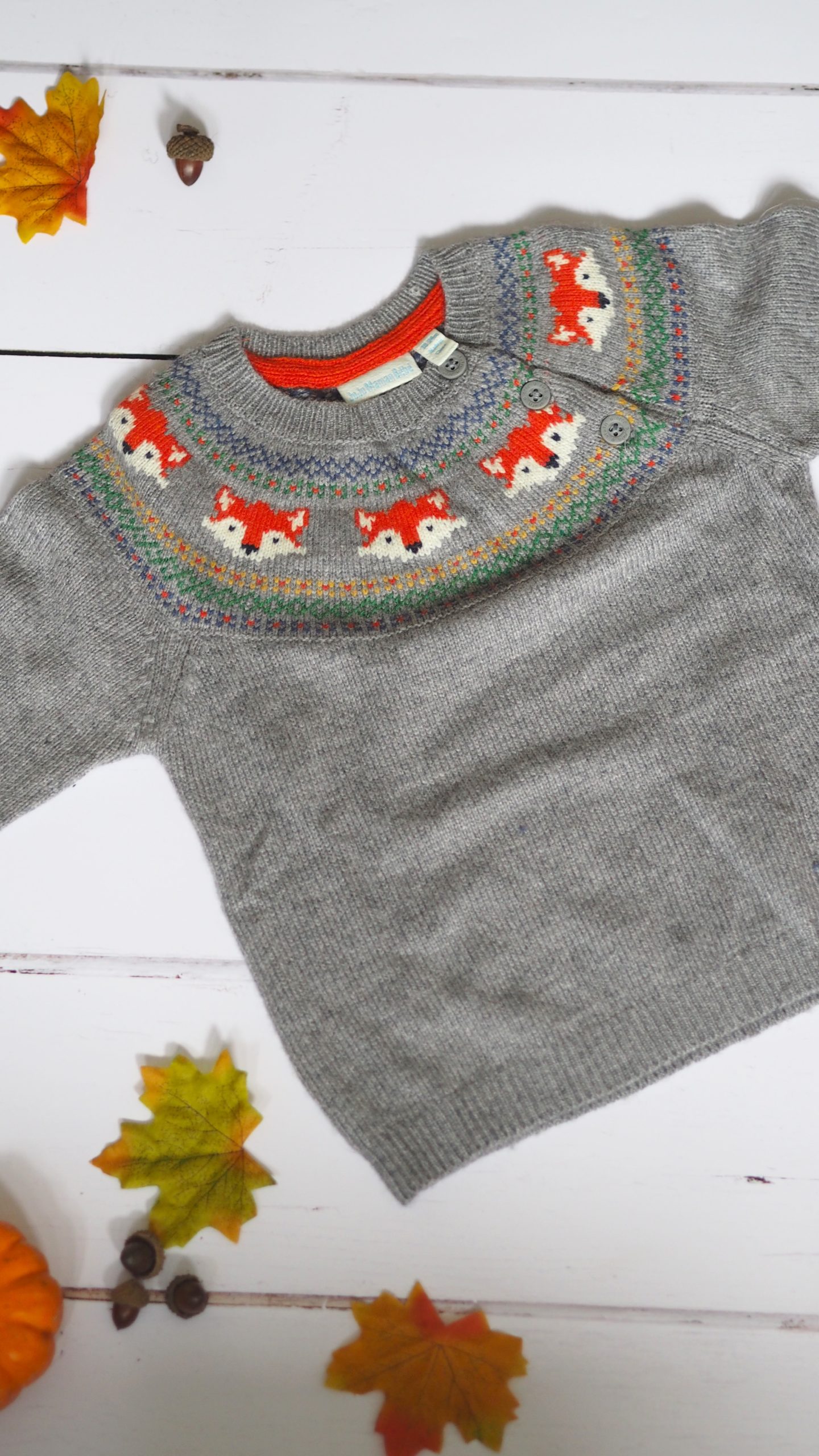 I find joggers are good for those days you are at home and they are playing on the floor This pair were my free item from the JoJo Maman Bebe’s 3 for 2 offer they recently had.  They come as a 2 pack and I ordered the Chambray and Navy coloured version (£18) as I thought that those colours would be ideal for Autumn.  These can be worn with long sleeved t-shirts or cosy jumpers. 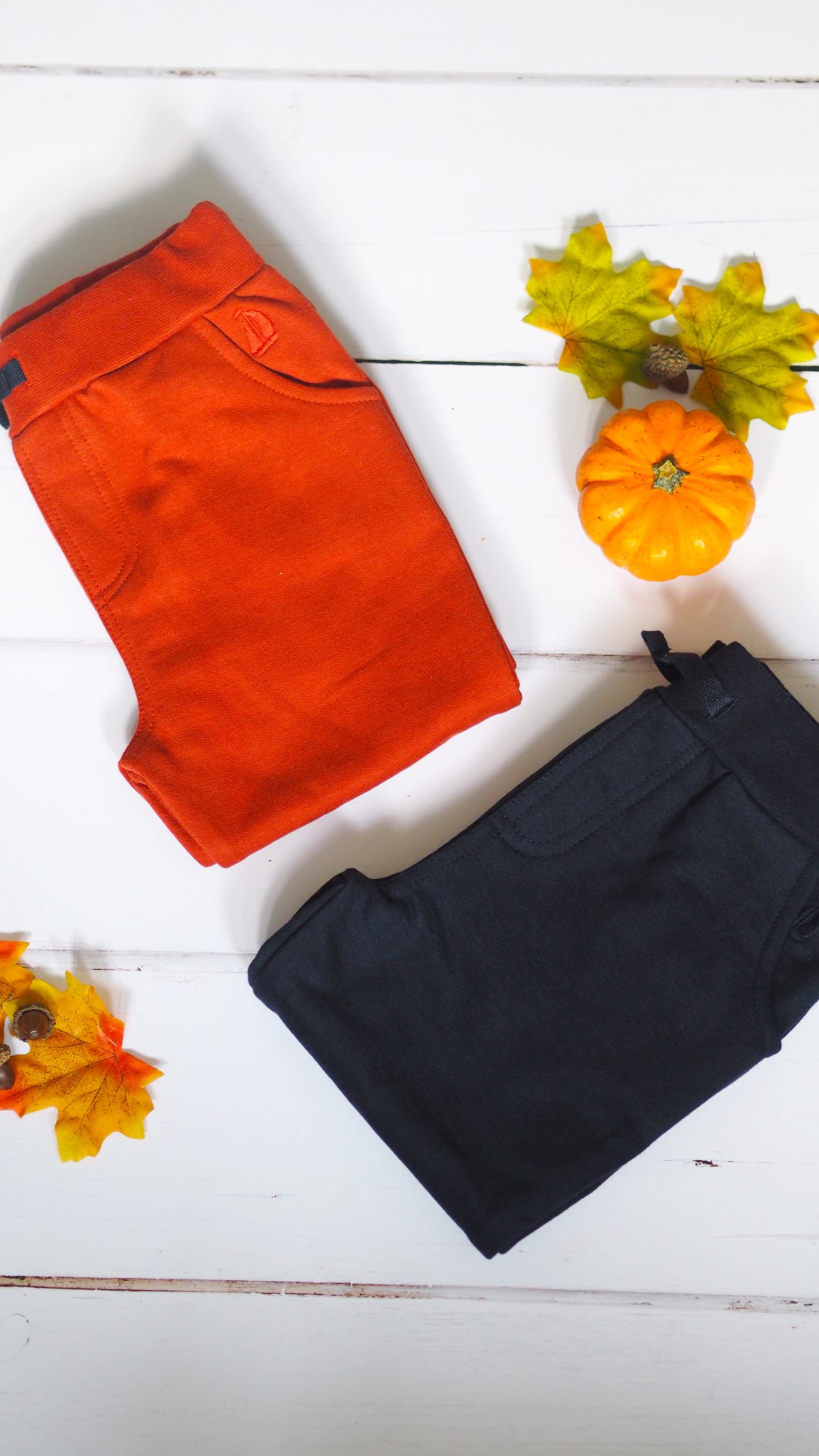 I hope my Toddler Boy Autumn clothing haul gave you some ideas on what to buy this season.  Is there anything that’s not on my list that you found really useful for the cooler months?  Let me know below in the comments.

If you are looking for other Autumn posts:

10 Things You Discover When You Become…