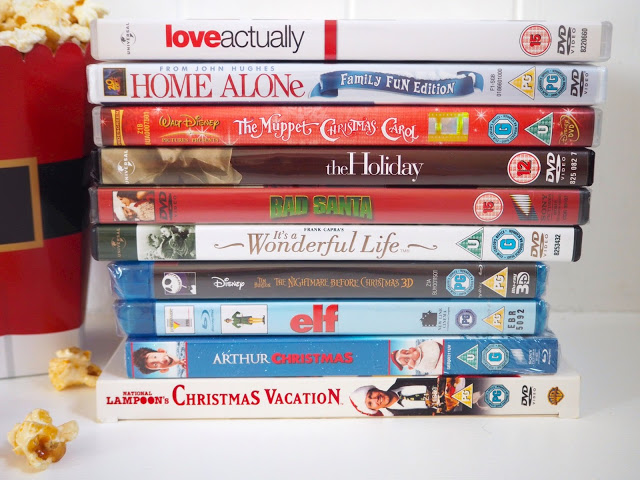 There is nothing like getting cosied up on the sofa and watching a Christmas film to make you feel all festive. There are plenty of them on Netflix, Sky or normal TV just now that you can watch. Or maybe you have your own Christmas movie collection at home that you love to put on instead.  If you are looking for some Christmas film inspo, here are my Top Ten Christmas films (in no particular order) that I love to watch and make me feel all warm and Christmassy inside.

No lead up to Christmas is complete without watching Elf.  I watch this film every year without fail and it still makes me laugh out loud.  I’m not particularly fond of Will Ferrell films but I totally love this one and don’t think I will ever tire of watching it.

For a bit of Christmas comedy and romance The Holiday ticks all of the right boxes, even Mr M has this down as one of his favourite Christmas films.  It’s not just a chick flick.  Jude Law is looking extremely hot in this film too if you like a film with a bit of eye candy in it.

I love watching this film on Christmas Eve while munching on mince pies and singing along with the Muppets to ‘One more sleep til Christmas’.  Can you believe this film is 24 years old?!  Nope! Me neither!

Another Crimbo RomCom that has both really sad moments as well as really funny ones.  From Liam Neeson’s character having to deal with being a single parent after his wife’s death to Hugh Grant’s dance scene as the Prime Minister in Number 10.

Keeeeeevvvvvvviiiiinnnnnnnnnn!! Love this film, also how cute was Macauley as a kid?  I have no idea how they could manage to forget about their child as they head off on their Christmas holiday (on more than one occasion!)  but it does make a good film.

One of my more recent Christmas film favourites with voices from Jim Broadbent, Hugh Laurie and Imelda Staunton.  Arthur ensures that no child is forgotten about at Christmas when a present for Gwen is left behind.  He makes sure that when she wakes up she has her gift fro Santa.

Clark Griswold and his family show us how not to do Christmas! This is another film that even after watching many times still makes me laugh. Cousin Eddie rocking up outside their home with his trailer has to be every family’s worst nightmare.

Fed up of all the feel good Christmas films that make you feel all warm and fuzzy inside? Then this is the film for you with its chain smoking, alcoholic, thieving, sex addicted Santa Claus!

Its A Wonderful Life

The oldest film on my list as it was made 70 years ago in 1946.  It is about a man who thinks that his life is no longer worth living and decides to commit suicide on Christmas Eve. He is saved by an Angel called Clarence who shows him how other people’s lives would be had he never existed.

The Nightmare Before Christmas

I love Tim Burton films and this is probably my most favourite film ever! I do see this more as a Halloween film but other people see it as a Christmas one so that’s why it will feature in my Halloween favourites too.

What is your favourite Christmas film?  Let me know in the comments below.

15 Things You Can Do This Summer

20 Things You Didn’t Know About Me