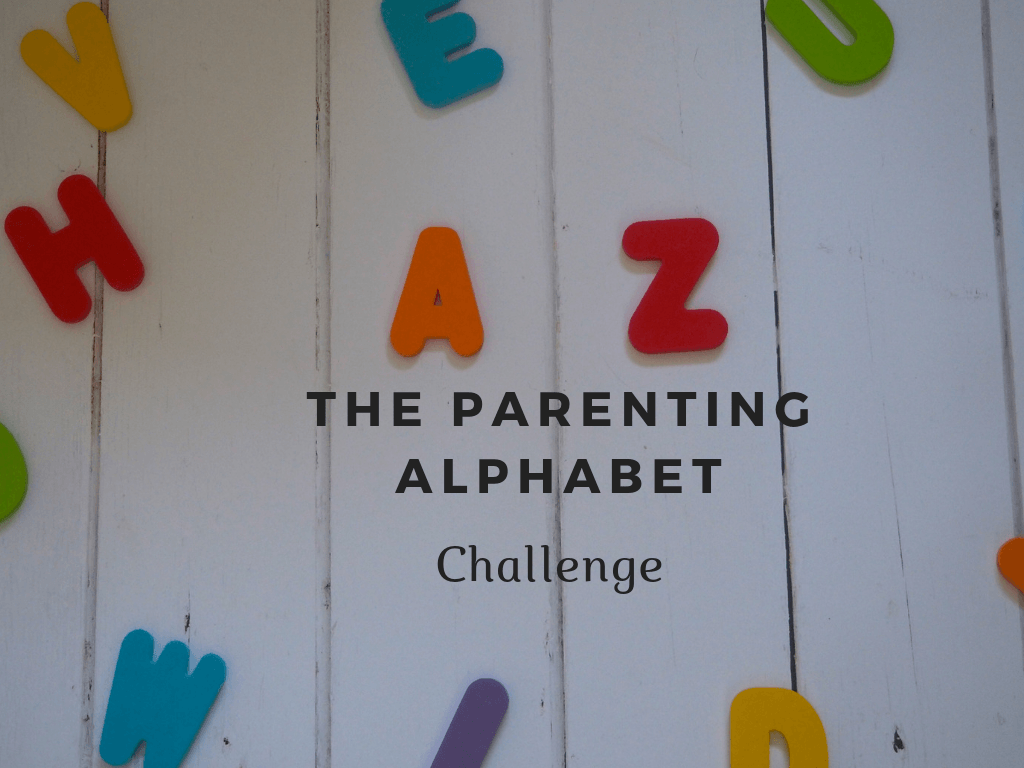 I was tagged to do the Parenting Alphabet Challenge by Louise at Mum and Son Adventures and Viv at Viv Simone.  The idea of this challenge is to use all the letters of the alphabet to describe your parenting experience.   I found some of these letters quite hard to do as I’ve only experienced parenthood for just over a year.  I’m sure as Noah gets older the letters will be easier to fill in such as A for Attitude, T For Tantrums, etc.  So here’s my experience of parenting so far:

Now that Noah is getting a bit older and more mobile we will be able to do and see more places with him.  I’m really looking forward to all the adventures we will have as he experiences new things with us.

This song is one of Noah’s favourites and is played in the car, at home on a daily basis.  I bet it is now stuck in your head too! Soz!

Whether your child has a snotty nose, cough, post vaccination fever or teething, Calpol is a gift from the gods!  The last three weeks have meant I’ve been using gallons* of the stuff as he’s had vaccinations plus one incisor and three molars all cutting through.  This. Has. Not. Been. A. Fun. Time.

*(obviously an exaggeration, in case you think I’ve been overdosing him)

After waiting to see whose name he would say first, at 9 months his first word was “Dada”!! At 14 months old I’m still waiting for him to say “Mama” or any variation of that ?.  Oh and even though we have 2 cats and my mum has a cat, he can say “dog”!

As in, into everything!  Toddlers are inquisitive little things.  All our kitchen cupboards have locks on them but other drawers and cupboards in the house don’t.  This means that they are fair game!  Drawers are opened and contents thrown around the room, wardrobes are flung open and shoes, bags, etc are emptied onto the floor and any bags lying around are rummaged in.  He leaves a whirlwind of mess before moving onto the next thing to investigate.

Freddie and Violet are our cats who are a huge part of our family.  I’m one of those people where my pets are like children to me so I parent them also. 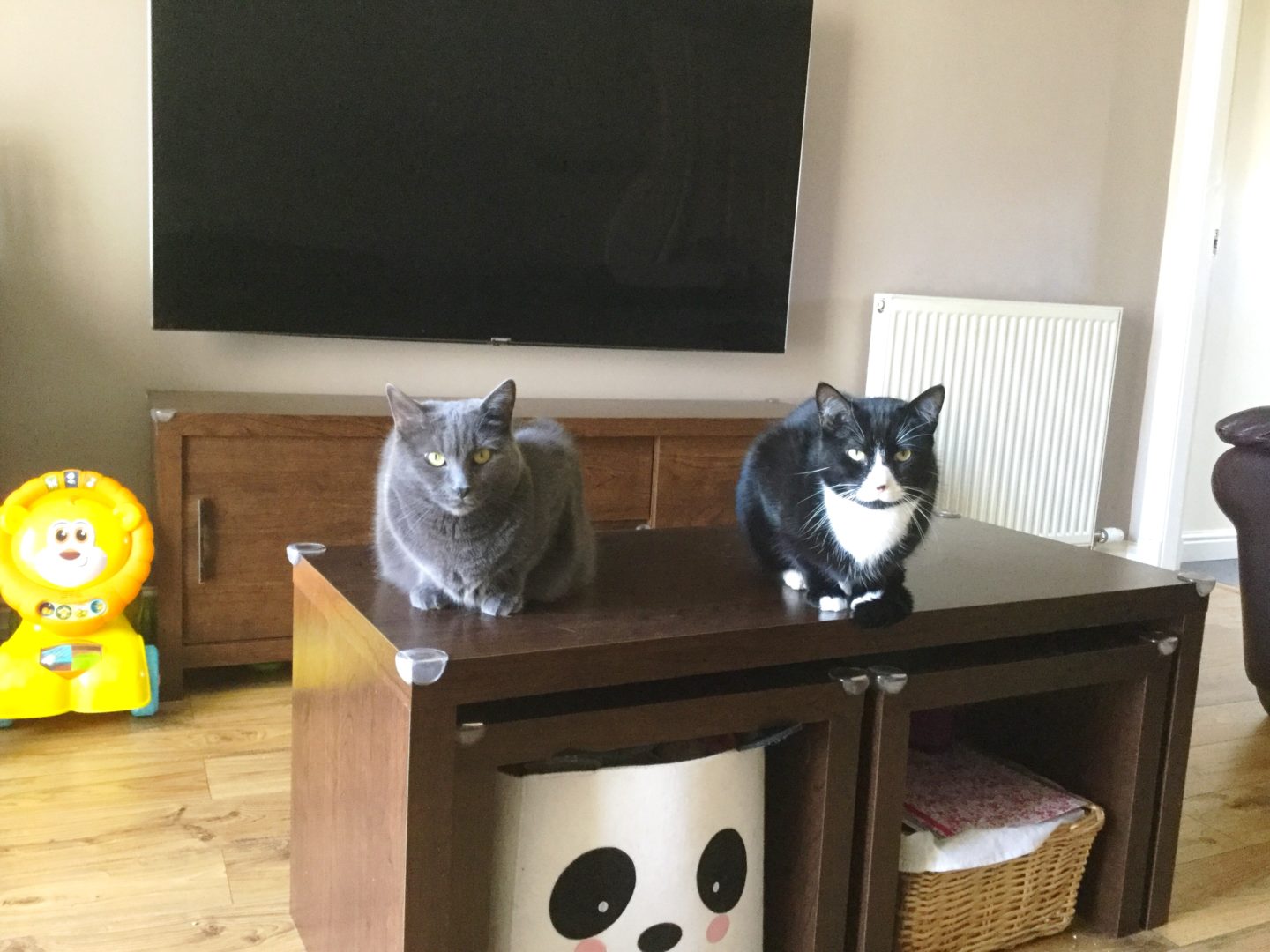 As we no longer use a childminder to look after Noah (that’s another story for another day) his grandparents look after him on the days I work.  Both sets love looking after him and is spoiled by them too.  I’m pretty sure that both his Dad and I never got away with the stuff that he does!

Hey Duggee is a cartoon on CBeebies  that Noah really loves to watch.  There is humour in it that only adults would ‘get’ which makes it even more enjoyable.

Not everyone has an easy time getting and staying pregnant, myself included.  It took us 13 years, 6 IVFs, what felt like 5764339 injections and a lot of money before we finally got our take home baby.

When I was little my Nanna and Granda took me back a teddy bear from their holiday in Jersey.  He was named Jersey Ted (a lot of thought clearly went into naming him).  He went everywhere with me and years later I still have him.  When I was a couple of months pregnant my parents went on holiday to Jersey so I asked them to take a teddy back so that the baby could also have their own Jersey Ted.  This is actually one of Noah’s favourite toys and often gives it a cuddle.

Noah laughs when you make kissing noises and give him kisses however he reciprocates with a Glasgow Kiss and you end up with a sore head instead.

Baby laughs are the cutest.  They can laugh hysterically over the littlest of things.  Noah is a happy baby and will laugh at many things; the cats playing with their toys, random things on tv, the word ‘pink’ for some reason, as well as funny noises and faces.

This is on CBeebies during the ‘Bedtime Hour’ and seems to be something that Noah loves to watch.  Not sure why as it’s got a creepy clown called ‘Colly Wobble’ in it which looks very disturbing. 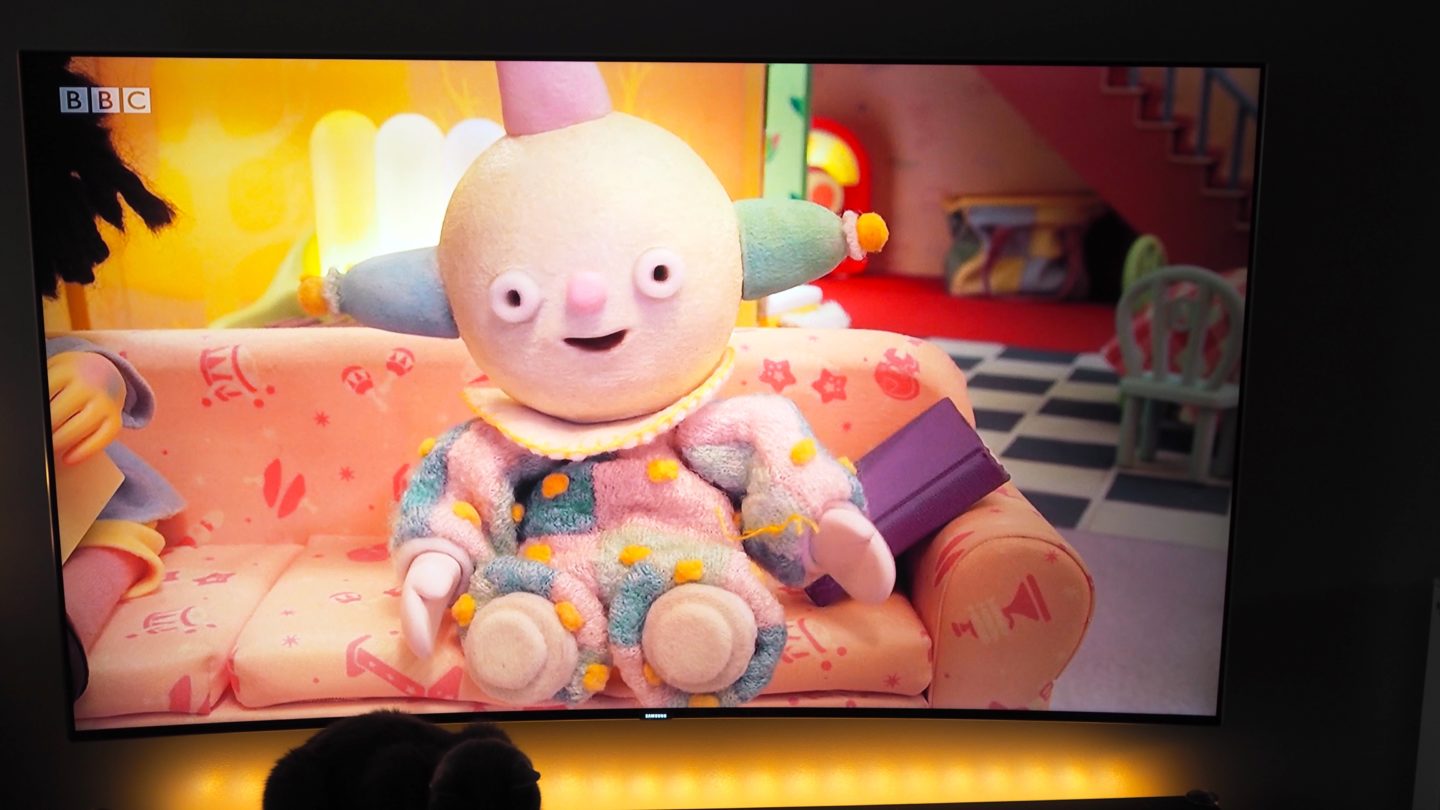 As this is the Parenting Alphabet Challenge then the letter N has to be Noah since he was the one that made me a parent.  Nappies was a close second as I never knew I’d be changing so many in one day!

I’m an only child and it wasn’t something that I had wanted for my own children.  While it’s nice that you get your parents undivided attention I think it would have been lovely to have had a sibling or two growing up especially now my parents are getting older.  After having a shitty pregnancy (see below) Noah will also be an only child and that makes me really sad for him.  I’ve been told by a consultant that I’m likely to have gestational diabetes and pre-eclampsia again and it’s really not worth the risk.

I thought after having such a difficult time getting pregnant that I might be #blessed with an easy pregnancy.  But no, if I played ‘Pregnancy Bingo’ I’d have a full house.  I had carpal tunnel, I’d vomit after cleaning my teeth, gestational diabetes was a gift at Christmas time which was quickly followed by pre-eclampsia.  This meant my legs and face were swollen AF and I was admitted at 34 weeks.  I then developed pneumonia and was on oxygen for a week plus iv antibiotics 5 times a day.  So a pretty shitty pregnancy if I’m being honest.  Oh and then I lost a lot of blood during my c section and had to get a blood transfusion.  With everything that went on it took a good couple of months to recover.  So it’s never happing again!!

Something that me (and the cats) look forward to on the rare occasion he has a nap.  No tv, music or babbling baby sounds.  Just peace and quiet!  Bliss!

All the books tell you to have a feed/sleep routine in the early days.  While it might work for some babies, Noah wasn’t having any of it!  No matter how hard we tried it just wasn’t happening.  So we gave up and just fed on demand (which was hourly for the first few months).   I think that as new parents you are bombarded with how things ‘should be’ but every baby is different so a standard ‘one size fits all’ approach just isn’t going to work for some people.

Sleep? What’s that?!  While you are aware that there are sleepless nights ahead nothing prepares you for how bad that actually makes you feel.  From two weeks old Noah didn’t sleep during the day, and woke up every 2 hours during the night.  It got slightly better at 12 weeks as although he still never napped in the daytime he would sleep 7.30pm – 5.30/6am.  The past 4 months have felt like the newborn stage again as he’s been getting up 2-3 times during the night.  Sleep deprivation is awful and the times where I got a full night’s sleep and felt refreshed in the morning are now sadly nothing but a distant memory.  In the words of Bon Jovi “I’ll sleep when I’m dead!”

Tea is a drink that is now often drank cold.  Or really strong.  Quite often I have left the teabag in for 40 minutes because I forgot I had made myself one.

Even though I am sleep deprived and drink my tea cold because of him I do feel an overwhelming love for the wee guy! Sometimes he will do something or will look at me and it just melts my heart.

The milky kind is the worst! It gets everywhere! Also it seems like double the volume comes out from what went in.

Even though I hoover every day there are still random bits of Cheerios, fluff and god knows what else lying on the floor that Noah seems to home in on and shove in his mouth!  Thing is he looks right at me, lifts his hand to his mouth and giggles, so he knows bloody fine it shouldn’t be going in there!! As soon as I ask what’s in his mouth and head towards him he is off like the speed of light as I chase him around the room trying to extract what ever he has picked up off the floor.

The letter X is a hard one, so I’ve cheated and used the shortened version of Christmas.  I’ve always loved Christmas and now that Noah is here we will be able to enjoy it more with his experiences of it.  Although I’m hoping they will be an improvement on his first one.  He had a full on meltdown for most of the day and refused to eat or sleep.  So yeah, that wasn’t an enjoyable Christmas for anyone. 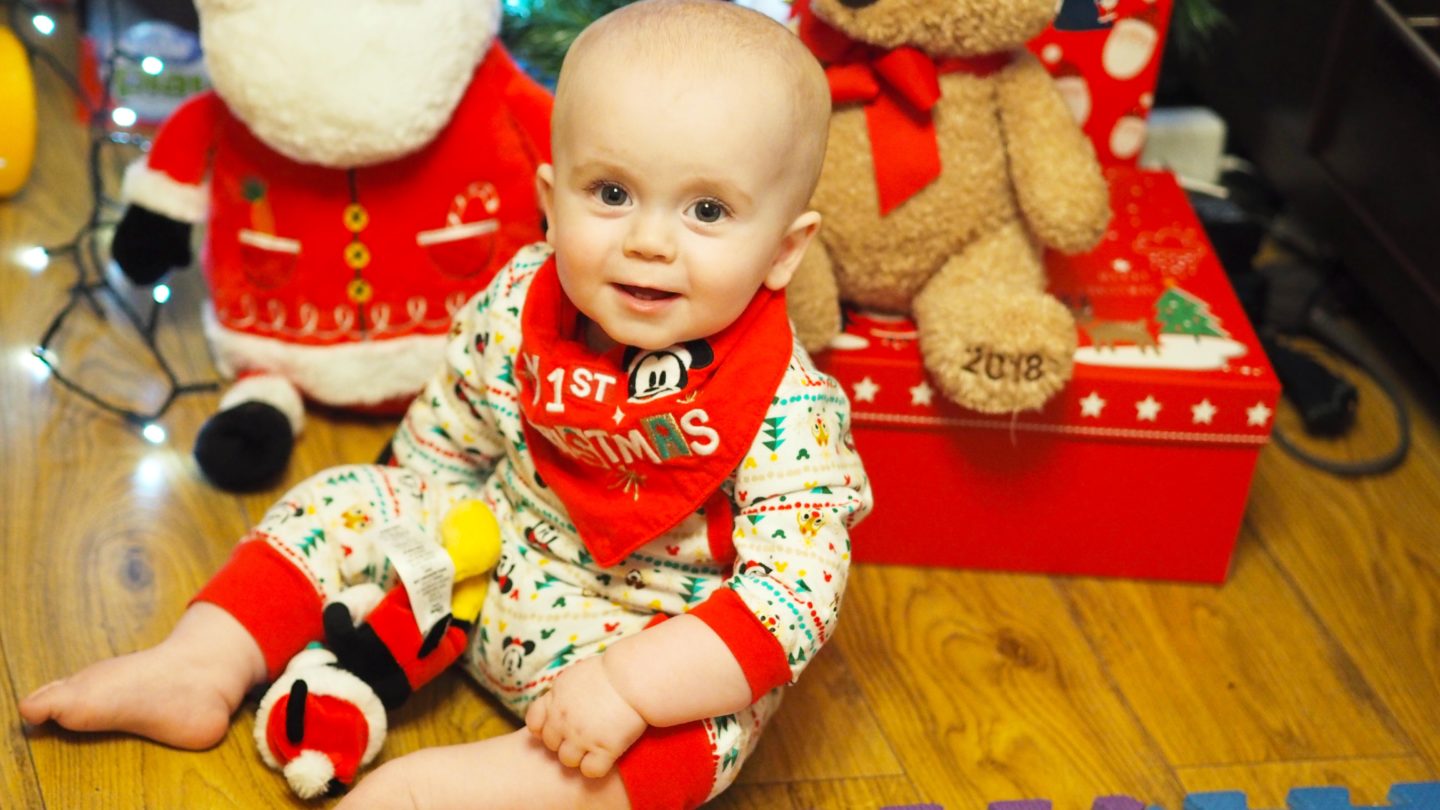 One thing I’ve noticed since becoming a parent is I just can’t stop yawning.  From the moment I wake up until I fall asleep I must yawn 578864 times a day.  I guess my facial muscles must be getting a good workout though!  Oh and I’ve already yawned three times while typing this paragraph.

After experiencing what feels like a 5 minute nap instead of a proper night’s sleep I not only look but also feel like a zombie.  Most days I’m  a deathly pale colour with big dark circles under my eyes.  Make up is very much my friend at the moment.

So there is my Parenting Alphabet Challenge.  It certainly was a challenge as I struggled with coming up with something for a few of the letters!  It was definitely a lot harder than I thought it would be.

I tag Mummy Mimi, Jilly Loves and Becca Blogs It Out to do the Parenting Alphabet Challenge.

If you are looking for other Parenting posts:

The Reality of Being A Mum Is……

How To Entertain Your Toddler This Summer