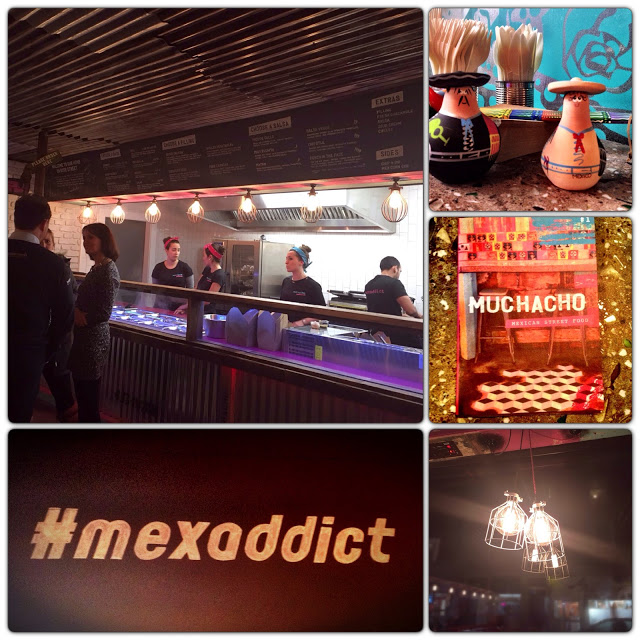 Last Thursday I was lucky enough to be invited to the sneak peek week of Muchacho, a new Mexican street food takeaway opening in Aberdeen. Seeing as my experience of Mexican food is limited to Chiquitos and Old El Paso I jumped at the chance to be able to sample authentic Mexican fare. Muchacho is situated in the Rose Street area of Aberdeen and is the brain child of Elena Aspe, Lee Brandie and Darren Wilson. While travelling, Elena and Lee loved the food so much that they decided to bring it back to Aberdeen by opening its first Mexican street food takeaway and that’s how Muchacho was born!

On arrival we were served delicious mocktails in cute little jars.  There were also nachos laid out along with some fresh tasty dips for us to try.   The sweetcorn dip was a personal favourite as well as with most of the other people there.  Believe me when I say it tastes ah-mazing!  Shout out to Segundo, the chef who makes this delicious dip using the ingredients; sweetcorn, mustard, cream cheese and honey. It tastes divine. We were then given a box with three small corn tacos. These were filled with either chicken, beef or pork along with some shredded lettuce, salsa and a wedge of lime.  They all tasted really good but the adobo chicken was definitely my favourite.  It had enough spice to give it a kick and had a fresh, citrusy flavour to it as well.  The Guerrero beef and the pork carnitas were spicier than the chicken but not ‘burn the roof off your mouth’ spicy.  However if you have masochistic tendencies and that is your thing then you can add ‘Punch in the Face’ sauce to your dish.  This salsa has a four chilli rating and I can only presume as I’m not brave enough to try, that this is so hot and spicy it feels like being punched in the face. 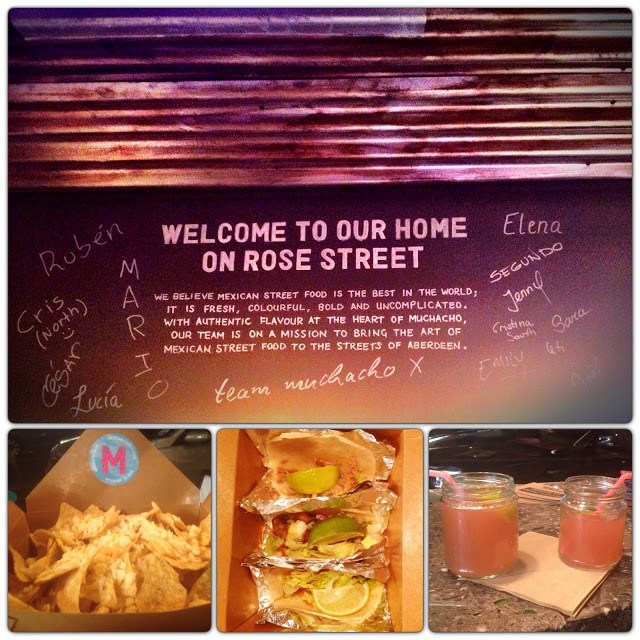 After Lee gave us the background on how Muchacho came about he invited us to order something off the menu.  I decided on the adobo chicken burrito so I could let Mr M try at home since he was unable to come with me.  The burrito is made from a large flour tortilla filled with rice, black beans,  your choice of salsa (had to be the sweetcorn one for me) and cheese.  If you are gluten free like me there is a naked burrito which is basically the filling minus the tortilla.  Other GF choices are: tacos with the corn tortilla, nachos or salad and for the vegetarians amongst you, there is a roasted vegetable filling. 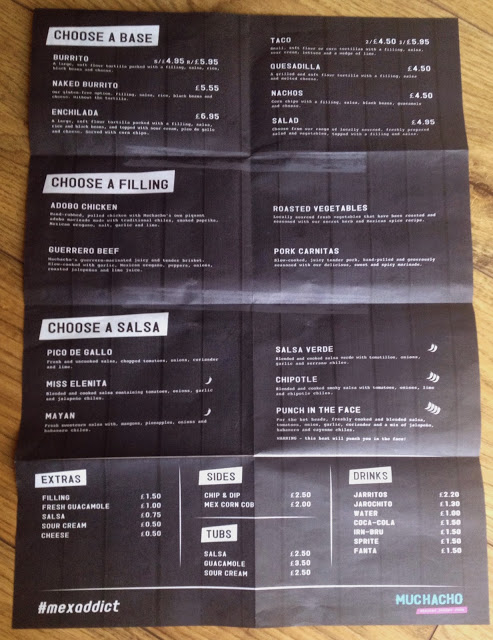 After tasting Mexican street food for the first time it gets a huge thumbs up from me. The flavours are incredible! Along with the lovely staff that work there and the funky graffiti decor I will definitely be heading back to Muchacho for some more of their Mexican tastiness.  Next time I will be giving the nachos a try (but not the Punch in the Face sauce, I’m not ready for that yet!).
Muchacho are open 7 days a week 10am-10pm.
Spread the love
Share: