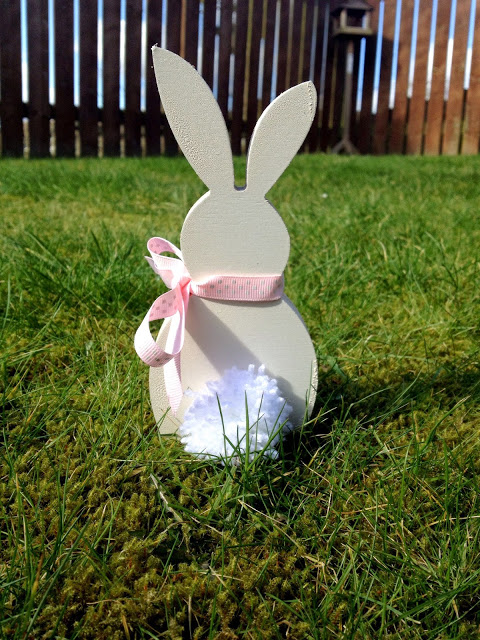 Rabbits and chicks are often used as Easter symbols and I have seen some lovely wooden Easter Bunny decorations in the shops but these also come with a hefty price tag. I haven’t done any crafty type stuff in ages and as I’m not working at the moment have plenty of time, I thought why not decorate my own.

I bought the pre-cut mdf rabbit shape on eBay for £1 plus £1.80 p&p which arrived quite quickly and I decided to spray paint it a cream colour. Other things you could do to decorate the wooden bunny is to decoupage with some nice paper or you could distress the paint with sandpaper to give it a rustic feel to it.

From Hobbycraft I bought the spray paint Plastikote in Antique White (£7.99), the Pom Pom maker (£5.90) and the wool (£1).  I have never used a Pom Pom maker before, I remember making Pom Poms at school using two cardboard circles with holes cut out in the middle (that we made ourselves) and winding the wool around that like this.Since it was a sunny day and not wanting spray paint (or the smell) in my house I decided to spray the bunny outside.  It takes around an hour for the paint to be touch dry before starting on the other side.  With trying to spray around the edges there was a little bit of paint that has run onto the side but you don’t really notice it unless you look closely (although the camera seems to have picked it up really well !!)

I made the bunny’s tail using the Pom Pom maker, which was really easy to use.  You open up one side of the pom pom maker and wind the wool around that side and then repeat on the other.  Once  both sides have been wound clip them together and cut all the way around, then tie a piece of wool around the middle and then pop the maker open. Voila a pom pom!!

You can use either hot glue or glue dots to stick the pom pom onto the wooden bunny and attach ribbon or raffia around its neck to make a bow or you could attach a pretty flower instead.

Have you made any Easter decorations?