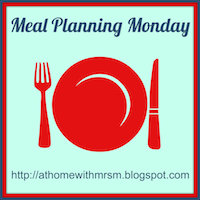 It was quite a change to the weather yesterday, starting off with some hailstones and then snow. We have been quite lucky up here as it has normally snowed quite a bit by now but we have only had one day where the snow had been lying which was at the start of December and a couple of days where there was a quick flurry of snow, other than that nothing!

The colder weather always makes me want to eat warm, comforting foods but since I went shopping on Friday the meal plan has already been set.

Friday – We had Tacos, we were going to have them on the Thursday but some numpty (me) forgot to buy passata/tinned tomatoes and so we had a takeaway instead.

Saturday – Was Italian night so I made bruschetta for a starter then we had meatballs and pasta.

Sunday – We had Chicken Fajitas, crispy chicken ones for Mr M and smoky BBQ ones for me.

Monday – Another Mexican meal but this time it is Chicken Enchiladas, this means we can use up the rest of the guacamole/salsa/soured cream, etc from yesterday.

Tuesday – I bought a Groupon voucher for afternoon tea at a Hotel (I’m taking my Mum) so I doubt I will be that hungry later in the evening but Mr M can have Scampi and Chips.

Wednesday – Going out for an Indian meal with my friend, this is another Groupon deal that I bought.  I had King Prawn Pathia last time so will have that again.  Mr M won’t starve though as he is going to his Mum’s!

Thursday – There are sausages in the freezer that need using up so it will be Sausage Casserole.

What are you having this week?  As usual, I have linked up to At Home with Mrs M’s Meal Planning Link, if you want to do the same click on the link or tweet #mealplanningmonday

A-Z of Me Clothes – A Clothing…

My Furry Monsters Part One – Ben