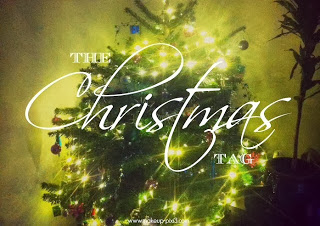 It’s only 29 days and 28 sleeps until the big day and I am already getting excited about it! Probably too excited for someone of my age but never mind :). There was a post on Lemonade Budget’s blog about a Christmas Tag so I decided to join in as well. It was originally started by Makeup-pixi3. I have included links to their blogs for you to check them out.

1. Do you prefer a real Christmas tree or synthetic?

Growing up we had a variety of synthetic trees and even after moving out I carried on using synthetic trees in my own home, but when we moved into the house we are in now we decided to get a real one as we have a large window. When buying a real tree I didn’t consider that choosing a tree in a large open space would make a tree look smaller, so after we managed to drag it indoors and put it where we wanted it, I discovered it obscured part of the television and left a small gap to get in and out of the room. I am hoping to get a real one again this year (will pay more attention to the size this time) as the smell is lovely and I think it looks far better than a synthetic tree.

2. You’re in a coffee shop, it’s December, what do you pick?

I’m not a coffee drinker, I like the smell of coffee but not the taste so it would have to be a Hot Chocolate. With marshmallows. Without cream. Although the festive flavours they sell do sound nice, I still don’t think I could drink one.

3. What’s your favourite colour scheme for decorating the tree?

In the first year in our home, I decided to co-ordinate the tree with the plum colour of the Living room. So I went out and bought new decorations and the tree was decorated in Plum and Silver. The following year I decided to go for colour so I bought ummm more new decorations, these were blues, oranges, pinks and also a few woodland animals such as a squirrel, deer, a raccoon, a cat from Accessorize (love their decorations)and I will use these ones again this year.

Now I am not going to lie and say giving as I do like to open a present or two on Christmas day but I do enjoy giving presents and seeing the recipient’s face when it is something that they love.

Hmmmm I’m not a massive lover of mince pies and have only came across a few that I like. Mr Kipling’s is one of the better kinds and I have made some of my own that tasted ok but I will probably say not (unless someone knows of a really nice kind to try?)

Over the years it’s been Prawn Cocktail for starters (my favourite), then it’s been either been turkey, pork, beef, beef Wellington, mushroom Wellington with roast potatoes, croquette potatoes, roast parsnips, carrots and Brussels sprouts. Oh and also pigs in blankets and stuffing as well. By time for dessert I am usually to full to eat anything else but I might have some Ben & Jerry’s ice cream later on as I don’t like Christmas pudding but this year I have already bought a Toffee and Pecan Roulade from Sainsburys….yum!

I always dress up on Christmas Day, even if it’s in my own house. Something sparkly is a must have so if it’s not on my clothes then I will put on some bling. This year I have bought a black sparkly strapless dress which I will wear with my black heels. I am going to my Parents’ this year so if there is snow on the ground I will need a pair of boots to travel there in.

I have quite a few Christmas CDs that I listen to in the car but when “Fairytale of New York” by Kirsty McColl and The Pogues comes on, I do tend to blast that one and screech along with the words.

There is quite a few that I love such as The Holiday, Love Actually, Bad Santa, Home Alone, Muppets’ Christmas Carol but my absolute favourite is Elf! Love that film so much! I’ve bought Arthur Christmas to watch this year which I haven’t seen yet but looking forward to that one.

10. Open presents before or after lunch?

Before! Now that I am an adult I have progressed from the 5am Christmas morning wake up to see what Santa has given me but I still get up early (about 7.30am) to open my presents.

If you have done this tag then let me know as I’d love to read them. I enjoy reading how others celebrate Christmas :)!

20 Things You Didn’t Know About Me

4 responses to “The Christmas Tag!”