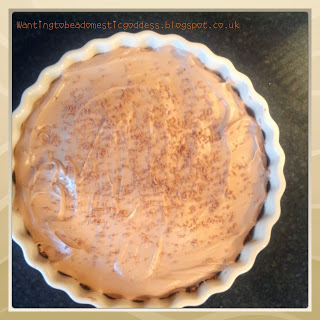 Today I decided to make a cheesecake……..I have never made one before so was unsure how it would turn out. Lets just say I was not disappointed :). I like cheesecake that are different such as Baileys, Banoffee, etc rather than a plain strawberry one or vanilla. So I decided to make a Chocolate Orange flavoured one and it was very, very nice. It was also quite easy to make and my right upper arm now aches from whisking the cream by hand.

If you would like to make the Cheesecake the recipe is below:

Put the half of the Hobnobs in a bowl and crush with the end of a rolling pin until they resemble breadcrumbs then put in the remaining Hobnobs.
Melt the butter in a microwavable bowl for 60 seconds or until it has melted. Add the crushed hobnobs to the butter and mix well.
Add the biscuit mix into a flan dish or into small glass dishes if you prefer to do individual desserts. Put in the fridge and leave for 30-40 mins.
Whisk the cream cheese and icing sugar together in a mixing bowl.
In a separate mixing bowl whisk the double cream till it peaks.
Break your chocolate orange into segments and keep back 2 segments. Melt the rest of the chocolate orange by putting it into a microwavable bowl and microwave for 30 seconds, stir then microwave for a further 30 seconds.
Stir the melted chocolate into the whipped cream and then add this to cream cheese and icing and whisk.
Put the mix on top of the biscuit base and spread evenly.
Grate the remaining chocolate segments on top of the mixture and place back into the fridge to set for around a couple of hours.